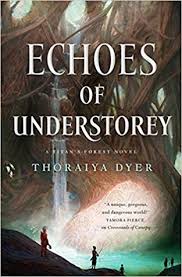 I read and really enjoyed Crossroads of Canopy a while back, so when Thoraiya offered to send me a review copy of the sequel I was all YAASSSS GIMME. So yes, this is a review copy, and yes I know the author.

The world is Titan’s Forest, and there are classes within classes in this place. The population is divided in three: those who live in the Canopy, closest to the sunlight; those in the Understorey; and those on the Floor, who basically live in the dark. The first book was very focussed on the Canopy, even though a lot of it happened in the Understorey; this one is focussed on the Understorey, even though a lot of it happens in Canopy; I really hope that a) there’s a third book coming and b) it will give us more about Floor. But I said there are classes within classes: within each physical division, there are wealth divisions (I mean I assume this applies to Floor), too. This is one of the interesting things Dyer is doing: the books aren’t just about the lucky ones, easy as that would be, nor just about the lonely outsiders. Instead, it’s a mix, as life and society are, showing the uneasy ways in which people mingle across borders. In fact that’s the whole point of this second book: Imeris doesn’t feel like she fits either in Understorey or in Canopy, and the people around her are equally unsure. So she crosses between worlds, trying to find her place, as well as an existential threat to the societies more generally.

Imeris is a minor character in the first book, but the focus here; Unar, the protagonist of the first book, is significant but minor here. I like this a lot; it makes the society the overall focus, rather than just one character. It also means we get to see Unar as other people see her, which gives some of her actions in the first book different nuances. And honestly, much as I enjoyed Unar in general, Imeris is a generally easier character to read! She’s not quite as driven and proud and amoral… not that those things are inherently bad in a character, but I found Imeris more sympathetic in her desire to be normal, not heroic in the slightest. Unar’s ambition got… wearying… especially because of its toll on others.

At a macro level, Imeris is trying to deal with the problem of Kirrik, an issue left over from the end of the last book, basically as a way of getting everyone off her back so she can have a normal life. To do that she has to become an excellent warrior, even if she doesn’t especially want to. This leads to various clashes with people who don’t like or trust her, and she ends up being thrust into a difficult quest that’s not really something she wants to do. As so often happens. There’s setbacks and deaths and compromises and moments of happiness too. And there’s a lot about the the Canopian gods, too, who play a significant role in the organisation of Canopy, living as they do amongst their people. This book has some even more intriguing hints at what those gods have done to get their place in society, which is another reason why I’m reeaaallly hoping for a third book because I could not stand to be left not knowing what Dyer knows about those gods.

The book is beautifully written and deeply evocative of the natural environment. It made me happy every time I came across a plant that was clearly inspired by Australian flora – like tallowwood and quandong and floodgum.