Tides of the Titans 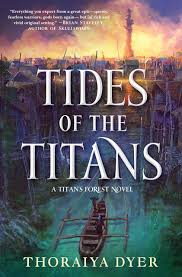 This book was sent to me by the author, at no cost. As were the previous books, Crossroads of Canopy and Echoes of Understorey. Because I am very lucky indeed.

This trilogy isn’t quite your standard trilogy because it doesn’t follow the same main characters throughout. Although the focal character is in the next two, she moves to the background; and the same happens between the second and third books. I really like this as a tactic because it means Dyer gets to explore the world of Titan’s Forest in much more complexity than might otherwise be possible – the three characters have such different roles in the Forest societies, and different motivations and personalities and so on. They interact with other characters in utterly different ways. But I also like that the three characters are all connected to each other, so we get to see family dynamics at play, and understand people from multiple perspectives.

I also like that none of the three main characters are particularly likeable; certainly not all the time. Don’t get me wrong – they’re compelling characters, and I generally understand why they think they have to do what they’re doing. But I frequently got exasperated with them for being selfish, or narrow-minded, or blinded by anger, or… other reasons. And this is a good thing, because it really is a fine line to walk to make me have a reaction like that but still be enjoying the character and the story overall. Dyer walks that line beautifully.

If you haven’t read the series yet, stop right here and go and do so: you really want to if you like complex societies and gods who aren’t that great really and live among humans, and quandongs and Australian trees getting even bigger than we let them get here, quests and revenge and family drama. Spoilers ahead for the first two books!