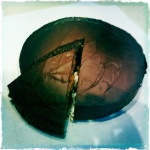 In which there is cake, cake and more cake – we discuss the year that was Galactic Suburbia One, authorial in crowds, gender bias, and announce our exciting new project. We can downloaded from iTunes, or streamed from Galactic Suburbia.

A Galactic Suburbs CAKE (for the ingredients)

The cake to the left is a boiled chocolate cake – the first cake I ever made, with my mother. It has pure chocolate as ‘icing’.

Left: Alisa’s cake – banana and chocolate, with chocolate frosting!
Right: Tansy’s cake, made by our producer and iced most impressively with cream cheese frosting.
News
The First Rule about the YA Mafia is that you don’t talk about the YA Mafia:
http://blackholly.livejournal.com/148264.html
http://justinelarbalestier.com/blog/2011/03/03/ya-mafias-other-things-you-dont-need-to-worry-about/
http://gwendabond.typepad.com/bondgirl/2011/03/secret-cabals-are-overrated.html
http://karenhealey.livejournal.com/925514.html
http://whatever.scalzi.com/2011/03/04/dear-new-writer-im-sorry-i-dont-have-time-to-crush-you
http://allycarter.abeedoo.com/blog/cliques-and-cabals
The conversation is starting to turn into something else, which is more about the power writers do/do not have to help or hinder each other’s careers.
http://sarahtales.livejournal.com/182357.html

Pet Subject
What has been a highlight of the year for us?
Has it been what we expected?
Have we achieved what we wanted to achieve? (What did we want to achieve?)

Please send feedback to us at galacticsuburbia@gmail.com, follow us on Twitter at @galacticsuburbs, check out Galactic Suburbia Podcast on Facebook and don’t forget to leave a review on iTunes if you love us!