The Selected Works of TS Spivet

I came to this book really expecting it to be speculative fiction. I don’t know why; I’ve been meaning to read it for years and all that time, I was quite convinced that it had a fantasy element to it. And I guess it sort of does, in that it’s an entirely unlikely story, but it’s not the out-and-out fantasy, or even the Charles de Lint-ish fantasy, that I was expecting. I really liked it though, and I thoroughly enjoyed the marginalia – in fact it’s this element that really makes it stand out.

TS Spivet is twelve years old. He’s also a cartographic genius, and obsessor. He maps everything: from the way the water moves across his parents’ property, to the motion vectors of a man on a bucking bronco. His artistic skill extends to drawing insects and animals and probably anything else that captures his interest. But it’s maps he loves the most.

Life is already difficult for TS as the story opens. His parents are being difficult, which is nothing unusual really; his father appears disappointed in him for not being more like his outdoors-y brother, his mother is obsessed with insects, and… well, that would be a spoiler. It’s just not all sunshine and joy. And then the Smithsonian calls, asking him to come and visit them because of his amazing drawings that have made their way to that hallowed institution. So TS takes off, across the entire US, to get to the Smithsonian where he feels he might be appreciated and where he can do some good.

(This is where I was expecting some fantastic element. I think I was hoping for something like in Libba Bray’s Going Bovine. It didn’t happen. It’s still a good story though.)

TS is an… interesting… character. I hadn’t expected to be quite so enthralled by a twelve year old character, and the reality is that he doesn’t act like one. He’s an innocent, in his expectations of people and his trusting nature, which is occasionally abused by adults who are just trying to get their own way. But at the same time he has, and develops, a canny sense of the world.

I enjoyed the story as a whole, of TS’ journey – and I have no idea about the places in America he travels through, but I hope Larsen has captured something of their true spirit, because it certainly feels that way. However, probably my absolute favourite part was reading about TS reading his mother’s journal about one of her husband’s ancestors, Emma Osterville. A woman like TS in many ways, precocious and fascinated by the natural world, who becomes a geologist. In fact I was so taken in by this story, and it had just enough plausible elements, that I did indeed google her… only to discover that she is as much Larsen’s creation as TS. Oh, so sad. 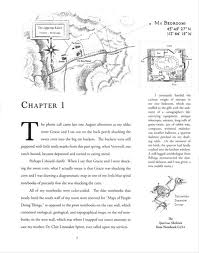 Aside from the somewhat-fey TS, the element that really sets this book apart is its physical nature. Many of the pages look like this, with marginalia and arrows added in – usually just on the sides but sometimes top and bottom too. They elaborate on various points of TS’ life and family; they include a number of his maps and other drawings; and generally provide a commentary that would otherwise be difficult to include but without which this would not be nearly so rich. Think Terry Pratchett’s footnotes, but more visual.

I can definitely recommend this to readers of young-adult fiction. While it isn’t fantasy, it does have that vibe about it; it will also appeal to those who dislike fantasy, and want more ‘mainstream’ literature. The prose is easy to read, elegant, and occasionally poetic; the illustrations add a great depth and joy.