Cars not my favourite thing. I like a chase scene, sure, and I have a ridiculous soft spot for Top Gear. But cars in general are not enough for me to watch a movie or enjoy it. 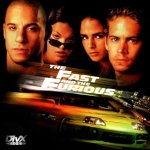 The Fast and the Furious therefore is not an obvious movie for me to watch or enjoy. And I did enjoy rewatching it. I haven’t seen it in years, and I had forgotten most of what happens. The plot itself… well. It’s not quite the equivalent of Top Gun, where as far as I am concerned there’s awesome plane stunts broken up by a really crappy story. It’s a mixture of Top Gun for the stunts and the story of Point Break, since it’s basically exactly the same story – cop undercover in an exciting seedy possibly-criminal world, gets too close, and then what happens? Here, Brian is the cop; he’s trying to get in with Dom, an ace quarter-mile illegal drag racer who might be part of a criminal gang knocking over trucks filled with electronics.

What’s good about it? I like the interplay between Dom and Brian. It’s absolutely alpha-male pissing contest, but it’s got… joy, maybe, and genuine respect, tied in. There are some entertaining secondary characters – the suspicious yob, the nerdy one, and two girls who largely exist just for the sexual tension, except Letty does indeed race with the boys and is mighty good at it.

And I love the car scenes.

2 Fast 2 Furious I had not seen before, or if I had it was wiped from my mind… because Diesel is not in it, and seriously bro what is the point then?

Anyway, we watched it. Brian has left the cops and moved to Miami where of course he’s drag racing and gets in trouble. He ends up working for the police to try and catch a big drugs-cartel dude who’s laundering money. Brian drags a former friend into the action, so that we get white boy-black boy interactions to prove that Brian is really hip, bro.

There are some improvements in this film over the last. Suki is a serious racer chick, complete with lady posse, tricked out car, and awesome graphic design skills. And she gets completely tied up in the shenanigans. There are some come-on remarks, but it mostly comes across as genuinely being part of the way they interact – it’s not meant to be taken seriously. And yes, this is problematic I know, but… it’s better than some of the alternatives? The position of the undercover cop Monica is slightly more problematic, being all caught up in URST on Brian’s (and possibly her) part, but it’s still more nuanced than in the first.

But the plot leaves a lot to be desired, given that it’s kind of a rehashing of the first one anyway just with a nastier villain calling the shots and thus raising the stakes. Brian and Roman’s relationship – while entertaining – isn’t much on Brian and Dom’s. And I think there might be less driving.

Worst plot, best driving. So my darling described this film, and I think he’s right. Drifting is simply glorious, I think because while I can feasibly imagine driving very fast in a straight line, drifting is an utterly alien skill set. Also, it’s through Tokyo, and that just looks magnificent.

Also, there’s Han: Sung Kang. Dude is so cool he’s basically ice. He’s my very favourite. Plus DK – the stereotypical jumped-up wannabe villain with too much arrogance and testosterone, playing on his uncle’s yakuza ties – is actually pretty awesome too. If only because he does menacing beautifully.

Foreigner in Japan, making all the mistakes… blah. It’s just not done interestingly enough to make the cliche worth it. Also the father-son reconciliation makes no sense. And given that it’s all about a white boy learning drifting from the Japanese kids and then beating the best, it’s could be seen as another example of white man being better than non-white man at something that’s native. In a sense, anyway.

And look, I’m sorry to the Americans, but Sean’s accent really doesn’t help matters. (Neela’s Australian accent is also totally out of place and unlikely.)