The Spy Who Loved Me

Summary: in which Russia’s best agent is a woman, someone is stealing submarines, cars turn into submarines and Bond visits Egypt. All to a very groovy 70s version of the Bond theme.

Alex: well, it turns out that James was right. There are a lot of Bonds I haven’t seen! … most of the Moores, in fact. And you know what? I am not sad about that fact. Because if I had, indeed, seen these movies before, then I would now have sat through them at least twice each, and I’m just not going to live that long.

Back in From Russia with Love, we were introduced to the idea of a Russian agent being female. The prologue here opens with the Russians deciding to put their best agent onto the case of a submarine going missing – then cutting to a bedroom scene – and it turning out that Triple X is actually the woman. Surprise fake out! Amusingly, this is then replicated with the British doing the same thing and, of course, cutting to Bond also in bed. He then escapes from dastardly Russians via a parachute with a Union Jack on it…

The credits feature an astonishing number of nude women in silhouette. And Carly Simone, whose “Nobody does it better” has grown on me a lot since I’ve stopped automatically associating a real estate agent with it.

We meet the man responsible for the disappearing subs very quickly, and the fact that he’s ruthless immediately: he kills his lover for apparently giving away secrets, and for I think the third time? is a villain with a penchant for sharks. He, too, continues the villain-as-deformed theme, although less obviously than some: his thumb and forefinger webbing is very pronounced. I guess this is meant to account for his love of the life aquatic? Or something anyway. Writing that I realise that other villains have a thing with water – Dr No, and the guy in Thunderball I think? Stromberg gets the coolest looking lair to this point, although it’s spoiled by the narcissism of calling it Atlantis. Stromberg’s villainy is further amplified by, of course, his henchmen. Let’s just glory in the fabulousness that is Jaws for a moment: 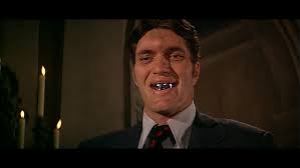 Yup, fine specimen of a henchman. To my everlasting joy, the film managed to combine both Stromberg’s love of sharks and Jaws’ ability and willingness to bite anything and everything by featuring a fight between a great white and the metal mouth himself. You know who wins already.

There is actually a plot here, and I think it’s a better one than the previous two – so surely that’s a good sign, right? The first was rock bottom, the second clawed its way out of despair, this one is almost conceivably bearable? Almost? Bond and Triple X (who is named at some point, I know, but I missed it and anyway the code name works) end up in Egypt chasing down the owner of a microfilm with details about the sub-thief. Bond turns out to rock pseudo-Tuareg gear and to speak Arabic, as well as having an old Cambridge chum who sets him up for the night in a totally Lawrence of Arabia tent and a member of his harem. Then, getting back to the point, Bond continues searching and manages to get a third woman killed by a bullet intended for him. There’s some killing, some arguing, and then Bond and Triple X find themselves having to work together when Jaws makes off with the microfilm.

To James’ eye-rolling, I must stop here a moment and squeal about how awesome it was to see Bond on location in Egypt, having been there myself. I’m astonished they let them film in Karnak, but I guess the 70s was a different time. The most hilarious bit, though, is when they’re at the Sound and Light show at Gaza… because the voice-over from 1977 is exactly the same one that I heard in 2013. Exactly.

Bond and Triple X fight Jaws at Karnak; there’s a hilarious moment where Triple X can’t get their escape van into gear, because everyone knows that women can’t drive, especially not manuals! Ha ha! And then neatly reverses into Jaws. Bond notes “You did save my life;” she tartly replies with “Everybody makes mistakes.” And then they walk in the desert, because the van breaks down, and they seriously, no jokes, do so to the strains of the Lawrence of Arabia theme. My eyes rolled so hard it hurt.

And then Triple X and Bond discover they have to work together. Gee, thank bosses. Off to Sardinia they go, via a train trip featuring Jaws in Triple X’s wardrobe (Bond electrocutes him, she falls into Bond’s arms afterwards) and the discovery that Stromberg is capturing nuclear missiles in order to blow up both the USSR and the USA so that he can start the world anew… apparently under water or something? Isn’t this all sounding very familiar, a la Blofeld? I guess there are only so many supervillain prime motivating factors to go around, and wealth is not Stromberg’s concern at this point. Anyway, Bond foils the plot, making the nukes blow up the subs instead… which still means that there were two nuclear explosions in the middle of two oceans, but apparently we don’t care about that. Triple X is taken by Stromberg back to Atlantis and forced to wear an outrageous dress; Bond rescues her and they get away in a bachelor pad escape pod, complete with Dom Perignon 52: 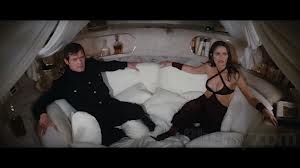 I really liked Triple X most of the time. She has a lovely line in snark, is well aware of what Bond is about, and is mostly allowed to be competent. Blowing sleeping powder in Bond’s face when he gets amorous? Priceless. Apparently getting over her dead lover very quickly is less so. Vowing to kill Bond after the mission, when she discovers he killed her lover, was awesome – I love her professionalism in agreeing to finish the mission before killing him. And she didn’t blow their cover as his ‘wife’ even when Bond tells her “don’t be a bother” when being shown around Atlantis. Reneging on that vow to kill him – without even trying! – was disappointing. I would have liked her to put up more of a fight.

Bond continues to be a snob and ludicrously knowledgable. He poses as a marine biologist, he knows Arabic, he gets a detonator out of a nuclear bomb, and he can reprogram computers.

Underwater car … one of the coolest Bond cars yet? Another lukewarm film otherwise.  The opening ski chase is classic bond and Triple X is a nice evolution for Bond as a franchise but there was still more cheese than a 1970s fondu set.  Great music.