Summary: in which, space. And Jaws. But no sharks.

Alex: still not a fan of Moore. However, there were some parts of this film that I actually liked. It’s definitely better paced than the earlier Moores, and who doesn’t love a good giggle over the hilarity of 1970s space stations? It does, however, feature my least favourite Bond theme. Sorry Shirley, it does nothing for me.

The prologue introduces us to the shuttle, Moonraker, as it gets hijacked. We also see Bond encounter Jaws again, henchmanning for some random villain, and then they both end up out of a plane sans parachute. This section had some truly awesome cinematography, and the feature on the DVD about how it was shot is definitely worth watching.

The shuttle was built by Drax Enterprises, and himself is pissed that the British lost his shuttle. So Bond is off to California to snoop around, see who might be responsible for it going missing. I WONDER WHO IT COULD BE? Oh wait, Drax is dressed almost entirely in black and speaks with a slight accent and in a monotone! Nothing suspicious here! No visible deformities, anyway, which is just about a first for this franchise. He does have two Lady Friends, one black and one white, who don’t speak; and two perfectly trained Dobermans; and a Generic Asian Servant. And yes, I really do think those three things can be listed as about equal, from the film’s perspective.

Drax graciously allows Bond to meet one of his chief scientists, Dr Goodhead. Who is, surprise! Female. Bond, condescending: “Are you training to be an astronaut?” Goodhead, I Am So Used To This Crap: “I’m fully trained, on loan from NASA.” What follows would be termed willy-waving if it were between two men, but because it’s between a man and a woman there’s the mandatory sexual frisson – from Bond anyway – as he tries to demonstrate to the woman WHO HAS AT LEAST ONE PHD that he knows as much as her. Because showing you’re smarter than her is a sure way into a woman’s pants. Or something. Still, hurrah for a competent female scientist! She may be my favourite woman from the Moore era yet, which still isn’t saying a whole lot because I didn’t love her. As an actress I found her boring and wooden; as a character she started off well but, as always, goes downhill after she (inevitably) succumbs to Bond’s irresistible charms. Not only does Bond have an ORGAN I CAN’T MENTION that turns women from evil to good, it also apparently saps the competency from them.

Anyway. Bond chases Drax’s establishment to Venice – hello gondola chases – and has a tour through a glass museum, which as soon as it comes on screen you just KNOW is going to be the scene of a horridly destructive fight. And it was. Then Bond goes to Rio, as far as I can tell just so that he can sleep with the local MI5 contact and the film can showcase Carnevale. And then he and Goodhead, who have now teamed up because she’s actually CIA, are off down the Amazon and there find Castle Anthrax. Seriously. All the astronauts in training there are beautiful and lissom and – it turns out – paired to one another, because Drax’s goal is to sterilise the Earth and bring back his genetically perfect humans to Rule The World! They all end up in space, and eventually, after some pretty cool null-grav scenes, Bond escapes and destroys it.

Brief space rant now. It can’t be that far out in orbit because it doesn’t take that long to reach it in their shuttles. How did they avoid detection? Well, Drax has developed a cloaking device (basically) that prevents radar from detecting

them. Ta dah! … but wait – what about the astronomers?? This is pre- any space telescopes. It’s also a time when, I presume, the light pollution wasn’t nearly so bad as it is today. I can guarantee that amateur astronomers would have spotted it, let alone the pros. Heck, I’ve followed the ISS in a telescope by moving the scope manually, and you can see the shape quite easily. This space city is meant to be much bigger than the ISS.

That  issue aside, the end of the space city is actually the most terrifying part of the whole movie because US-trained space troops fly up to occupy it (once they know it’s there): they know how to fight in space, and they have laser guns. This is what the 1980s feared with discussion of the militarisation of space. And I can well understand the fear.

Weird moment: the code to get into a secret lab is the signature motif from Close Encounters of the Third Kind.

From a racial perspective: Generic Asian Servant gets to beat up Bond a bit, but of course can’t win. There are some non-white astronauts in Drax’s plan for perfecting humanity, so that’s awesome – but it is overwhelmingly white.

From a feminist perspective: Goodhead isn’t bad; she takes a while to succumb to Bond, and she is blunt about her lack of trust in him. She stays mostly competent when she’s allowed to demonstrate it. There are three other “Bond women.” He’s smooching one at the start, who then pulls a gun on him – hilarious, but she is then nowhere while the fight takes place, and given it’s on a plane that makes no sense. Then there’s Drax’s helicopter pilot. Bond kisses her, she responds with “You presume a great deal” – and then kisses him back. She dies. The Brazilian contact is attacked by Jaws in a clown outfit.

Jaws! How remiss of me not to mention: Jaws gets a girlfriend! Aww… they meet when he’s just finished destroying a cable car with Bond and Goodhead on board. They both end up on the space city, and Jaws actually helps Bond when he realises that neither he nor Braids meets Drax’s standards of human perfection. And he even gets to speak, which I’m sure meant that he had to take out the metal teeth. 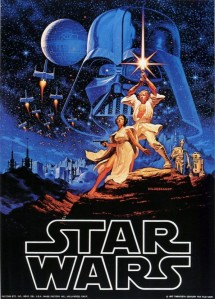 ames: Classic movie poster – almost as awesome as the vintage Star Wars ones.  It might be my favourite part though.  The effects are improving as we move forwards in time too but like Alex I’m bored with Moore and ready to move on.  More space, more lasers – I had never really noticed in the past how central space, orbital weapons and lasers are to Bond (and it’s not about to stop yet…). 2 Martinis.