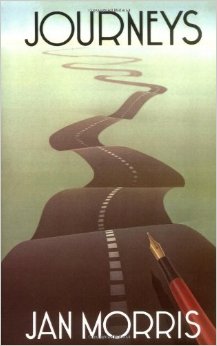 Reading a collection of travel essays written in the early 1980s is a surreal experience. So I’ll break this discussion into two parts: by golly I love Morris’ writing, and the essays themselves.

By golly I love the way Jan Morris writes. She constructs beautiful, evocative sentences. Describing the approach to Wells: “As one descends from the spooky heights of Mendip, haunted by speleologists and Roman snails, it lies there in the lee of the hills infinitely snug and wholesome.” On travelling to China for the first time: “Of course, wherever you are in the world, China stands figuratively there, a dim tremendous presence somewhere across the horizon, sending out its coded messages, exerting its ancient magnetism over the continents.” I’m no writer; I don’t have the ability to assess what makes great prose great. (There’s a great piece of graffiti near my house that says “I know art, but I don’t know what I like.”) I do know that I enjoy Morris’ writing, that I find her descriptions absorbing and sometimes moving, and that some of the books I read would be improved by their authors having read and considered Morris’ style.

Separating the form from the content should not be read as a negative about the content, don’t worry.

The first essay is about Sydney, and as an Australian this was really, really interesting. I felt there were parts that Morris exaggerated, and I was a bit uncomfortable with “Kev,” the white-collar worker standing in for Everyday Aussie, and she pokes a bit of fun at Sydney attitudes and expectations. Now, all of these are standard in a travel essay, sure. But I’ve never read a travel essay by a professional like Morris about somewhere that I kind of know – I don’t actually know Sydney very well, but Morris writes about Sydney as representative of the entire country (to which true Melbournians recoil in horror…). So I enjoyed the essay – she says some very true things, very appropriate things, and of course it’s well written. But it also meant that when I read her other essays, of places I have never been (of every other place she mentions, I’ve only been to Wells), I was aware that a native of those places may well have the same reaction as I did to the Sydney essay. Which made for an intriguing experience: not completely immersed in the narrative or the description, but interrogating her assumptions and elisions and emphases. For this sort of writing, I think my experience was actually enhanced.

This is Morris’ fourth book of essays. None of them have dates attached; the publication details simply explain that most appeared in Rolling Stone, a few in other publications. It came out in 1984 and there’a reference somewhere to 1977, so I presume they all date to that general time; the historian in me really wants dates on each one! There are several essays on parts of the US: my zero interest in Las Vegas succeeded in plummeting even lower, although Santa Fe intrigues; a few on Europe – she’s not a huge fan of Stockholm yet somehow I am now more interested in going, and Cetinje in Yugoslavia (now Montenegro) absolutely fascinates. And the Indian and Chinese essays are probably the most intriguing, and most problematic, in terms of how people and places are viewed.

I love Morris’ work and may well make it an ambition to collect most of what she has written.