I feel conflicted about rating this on Goodreads. I’d like to make it 3.5 – I’m such a sucker for half marks; I guess I tend towards ambivalence? I dunno… 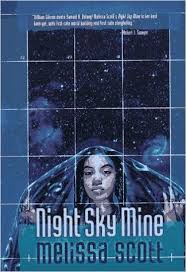 The set-up is great, as I’ve come to expect from a Scott novel. In fact after I read the first few pages I sighed with happiness and wondered why it took me so long to get around to reading this – it’s been on my shelf for ages – since the writing is lovely and captivating and immediately immersive. So that’s a wonderful thing and the prose itself stays very readable. The plot, though… it feels like a very long build up to a very abrupt and somewhat unsatisfying conclusion. I was surprised, as I read, that there were increasingly few pages left to go and no sign of clima – oh, there it went! Blink and you just about miss it. It felt like Scott either got bored by the story and/or characters (I’m going with the latter), and just wanted out, or she’d been given a timeframe that meant she had to rush the conclusion. Perhaps that’s a disservice and she always intended it to work that way, but it didn’t work for me.

Anyway: the story has two different plots that end up entangled. In one, Ista lives on a station owned and run by the Night Sky Mine Company, and she’s learning to be a hypothecary – someone who deals with what we would call the virtual world. There are safe nets, controlled by companies and governments, and then there are the wildnets – where anything might develop. Programs are flora – basically immobile – or fauna; Scott has developed an awesome nomenclature that give teasing hints as to characteristics of these programs (chogets and hug-me-tights and walaroo…). That was the aspect that felt really familiar from other Scott novels and that playfulness is something I really enjoyed.

The second plot involves Justin and Tarasov, men of very different backgrounds trying to make their relationship work dirt-side. Tarasov works in policing and they end up getting involved in an investigation that leads them to the Night Sky Mine system, and meeting up with Ista, and discovering that they all have some common interests that they want investigated.

The virtual world aspect is intriguing; there are hints at how it developed and got away from strict human control, but nothing too definite. The other world-building aspect that is intriguing is how Scott imagines human society working; this is no utopia, although it’s not quite a dystopia either (so quite realistic then). Humanity, at least within the Federation systems, are born into quite distinct castes – Union, Management, Transport, probably a few others – and there are definite resentments towards the different groups; Union always feels hard done by and that they are always the bottom of the pile. Friendships across castes are difficult, and love even more so. And then Scott adds another group, which I think is absolutely true to human nature: the Travellers. People who reject the idea of being tied to a caste and a certain job and a certain place. The most extreme Travellers (the Orthodox) take a spiritual view of their place in society, while Reformed Travellers are in it for the movement and lack of stricture. I could definitely read more stories set in this world, exploring how the different groups interact.

In the end I certainly don’t regret reading the book. I am glad that it wasn’t the first of Scott’s books I read, because I probably wouldn’t have gone on to read others – and then I would have missed out on Trouble and Her Friends which is definitely one of my very favourite cyberpunk stories.