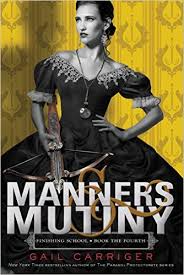 This book was provided to me by the publisher at no cost.

Firstly? I do not love this cover. It’s far too old to be Sophronia, which I don’t remember being a problem with the other covers. The crossbow is appropriate, at least. I am also not wild about the yellow.

Fortunately I do not tend to judge books by covers; at least, not books in a series I have been enjoying and whose author I tend to trust.

Anyway, the fourth and last Finishing School book! It’s the right time for it to finish; I was starting to get a little bored by Sophronia and of course events were getting more and more outrageous. I certainly still enjoyed this book but it was less… winsome than the earlier ones. This is probably a factor of Sophronia et al growing up; there’s a difference between 13 year olds and 17 year olds (or whatever it is; close to that anyway).

One of the things I have liked about this series is that there’s a specific evil/problem that the girls (mostly, with occasional boy hanger-on) need to Deal With, but these problems are all threaded together across the series – Picklemen, and their desire to Do Dastardly Deeds.* It all comes to a head in this book, which is another reason why this is an appropriate end-point.

In terms of plot: well, it’s much like the others, of course. Aside from a quick dash home for Christmas (back to school for New Year’s Eve, which I think is weird), Sophronia, Dimity and Agatha spend all their time at Mademoiselle Geraldine’s Finishing School – occasionally doing their lessons, mostly (in Sophronia’s case) getting into mischief. There’s really not much else to say without spoiling the other books. If you like school books and espionage and amusing banter and mannerpunk, you’re probably already here – if not, don’t start here, go to Etiquette and Espionage! If you’re not into those things, then this is not the book for you anyway, and that’s totes cool.

I liked some of the character development. I still mourn Sidheag a lot; she was such a good contrast to the others. Dimity continues to be poorly done by with regard to becoming an actual well-rounded person; I liked that Agatha got a bit more depth. The focus, though, is absolutely on Sophronia – and to be honest this has got to the point of feeling a bit selfish, which actually reflects Sophronia’s personality. Some of the teachers got nice tidbits, which I liked.

So… Soap and Sophronia got together and Felix Mersey seriously got the flick. I don’t mind that they got together – I think that’s quite sweet. However. I am unconvinced that a young woman of this era, even one as rebellious as Sophronia, would be quite so equanimous in the face of social pariahdom – not just the loving a black man bit, nor the werewolf bit, but the ‘living in sin’ bit. It was introduced far too quickly – too conveniently? – for this to really be taken seriously. The idea that this would be an acceptable way of having Soap and continuing to be at large in society… there’s just not enough discussion about the repercussions of such a move, nor even of the possibilities it affords. I was disappointed by this as a solution, because although it’s nice from a sentimental perspective it sticks out terribly from a plot&character perspective.

Will I reread this series? Maybe. Probably the first one, because it was really quite cute. I have however recommended them to kids, and will probably lend them out to the burgeoning horde in my vicinity.

*It must be said though that what they want regarding mechanicals could actually be regarded sympathetically… if that’s what the author wanted to do.