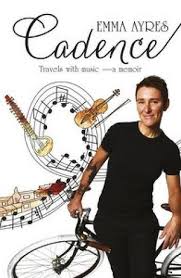 You gave me Emma Ayres’ memoir Cadence a year ago. It’s only taken me a year to get around to reading it, which let’s be honest isn’t a bad turn around when it comes to your gifts and my reading them.

Anyway, you gave me this book for a number of reasons. I think you knew that Classic FM was our choice of alarm-clock-station; after quarrelling over whether it should be Triple M (him) or Triple J (me), and anyway then we both grew up. So for a long time it was Emma’s dulcet tones that let me know it was time to drag my carcass out of bed. Then there was the bicycle aspect: one of the chief points of the book is that Emma rides her bike from England to Hong Kong, and that reminded you of our bicycle trip around the UK. And then there was the music aspect, which clearly had nothing to do with me but I guess you thought might appeal to my trumpeter (but she’s viola and cello, and brass players and string players have something of a mutual animosity I think).

The first thing to note about this book is that it made me immensely grateful for my stable, boring childhood. Boring in that sense is a good thing. Because Emma did not have a boring childhood. Her father left the family when she was very young; her mother struggled immensely to provide for the family; her middle sister was very troubled/ bordering on dangerous. None of them issues I had to deal with. Also her mother signed her up for violin instead of cello, thus breaking her heart. You on the other hand allowed me to experiment with flute but probably were not surprised when I gave it up pretty quickly. Let’s be honest; I’m not exactly flautist material.

The book has a lot of potential… which phrase may be a clue to the fact that I didn’t adore it. Sorry.

The potential is in Emma’s life: the life of a musician isn’t inherently interesting but Emma did a lot of interesting things – studied in Berlin, played in Hong Kong – and she has a nice turn of phrase that makes even a non-musician interested in the learning to play music bits. Plus she keeps agonising about whether she wants to try her hand at cello, as an adult, which is a fairly major change to consider.

Then of course there’s the trip across Europe and Asia by bicycle, and all that entailed. She did it solo, and she attributes the many, many interesting conversations she had to this fact – and the fact that she was cycling with a violin strapped to her back. Turns out that even if you don’t speak the same language you can indicate your desire for a bit of Brahms with your lunch fairly easily.

In the last half or so of the book, Emma starts talking about the idea of cadence, which is apparently a big deal in music. (I must admit that there were a few bits that I skimmed over… because I just don’t get music-speak, so when she’s waxing lyrical about majors and minors and tones and fifths, my eyes glaze and I start thinking about lunch.) There’s perfect cadences and interrupted cadences and so on. Cadence is also important in cycling, and when you get a good cadence riding is a bit like flying. I think that what Emma was trying to convey in this memoir is that life has its cadences. Interrupted cadences can add to the richness of life, and so on. But… she only started talking about that towards the end. So it didn’t really work as a framing device.

I think this is the problem with the book overall. There’s a distinct lack of structure and form. Is it a book about her cycling adventure? Well, yes, but not entirely. In fact I felt a bit betrayed in the last chapter where she mentions that actually she got to Lahore, was so stuffed that she went home for a while, then flew back to Lahore to finish. Which is SO fine, I’ve got nothing invested in her finishing in one go, but… why not mention that say, chronologically? It’s also only at the end that you find out she’s been raising money for a charity. Which is weird. Anyway. It’s also about her making major life choices… but it’s not always framed around those, either. So I was frustrated by the meandering from childhood story to 20-something story to 30-something story with a lack of obvious connection. Like going from Brahms to Limp Bizkit and then to Howlin’ Wolf without an explanation as to why.

ANYway. Thanks for buying us this book. It’s not one I would have bought myself but I definitely don’t regret reading it. It only took me a day to read while I was camping.