The Girl with the Dragon Heart 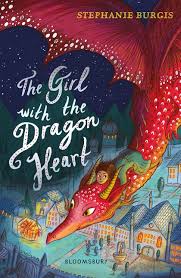 This book was sent to me by the publisher, Bloomsbury, at no cost. I believe it comes out in Australia at the start of September; RRP $14.99.

I heard about this book from Tansy, who adored it, so when I got to a chance to review it I was pretty stoked. But a thing I did not realise: this is a sequel! When I read the first chapter or so I wasn’t sure whether Burgis was doing something quite ambitious for this middle grade/ YA book (the protagonist is 13: I don’t know how to classify books for younger readers) – that is, leaping right into the story and then adding a bit of background information. Then I found out that before this is The Dragon with a Chocolate Heart, and it made a bit more sense. That said, I think that the narrators are different in the two books, and obviously I haven’t read the first but I still managed to read and love this book… so it does stand by itself.

Silke is 13 and determined to write her own story of her life, with herself as heroine not victim. She and her brother have been on their own since their parents were captured or killed as the family were fleeing their homeland some years ago. Most recently, Silke has been making herself useful to the chocolate makers at The Chocolate Heart, who have employed her best friend who is usually in human form but is actually a dragon (it’s complicated). She’s waitressing, and telling stories both orally and via broadsheet. But then she gets a job from the crown princess when the neighbouring fairy royalty, who have been living underground for a century, suddenly come for a visit. Silke has the chance to prove herself but of course things won’t go as smoothly as one might hope…

There’s a lot to like here. The action moves quickly, but there’s still lovely moments of character development. And the characters are great: mostly girls and women, with genuine diversity of character. The crown princess might be well loved, but/and she’s also a ruthless politician when necessary. The younger princess feels overshadowed; the chocolate apprentice is true to her dragon heritage; the adult women are sometimes compassionate, sometimes impatient, sometimes ignorant. The male characters are also diverse – Silke’s older brother is, basically, an older brother; sometimes the men are greedy, sometimes loving. Silke herself is basically creating herself as she goes along, which is probably her most intriguing characteristic: after early trauma she is determined not to have her life written for her. And so she puts on an act – which is sometimes a good thing, and sometimes not, and that’s acknowledged by the text.

As for the action: it’s clear from early on that the arrival of the fairies isn’t going to be the wondrous thing that the population might hope. It takes some unexpected turns, much like Silke learning the ins and outs of the servants’ passageways within the castle. The fairies have a bit less development than some other characters, but it does all work well as a narrative.

I really enjoyed this and look forward to giving it to the younger readers in my life.