The Brink of Darkness 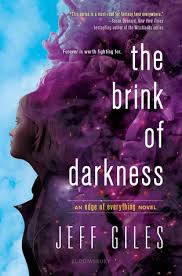 This book was sent to me by the publisher, Bloomsbury, at no cost. It came out in August; $16.99.

I read the first book in this series, The Edge of Everything and according to my review I largely enjoyed it – I have to say I’d mostly forgotten the book by the time the sequel arrived. If you liked the first one you’re likely to enjoy this one, I think. If you’re not sure, then I have one word for you:

Everything is DIRE and potentially life-altering and epic. X has gone; oh no! My friends are unhappy with me; oh no! etc. I did end up getting impatient with the book – mostly with the characters, but I wonder if it’s actually a pacing issue. Maybe I wouldn’t have had the time to roll my eyes at the melodrama if things had moved faster?

Spoilers for the first book

X is back in the Lowlands and of course things have changed because not only does he want to find his mother, but he also wants to be back with Zoe. Mild spoiler: I found the whole ‘searching for his mother’ thing overdone. There were definitely moments where I thought if he’d asked a different, obvious-to-me question, things would have been different. I also thought some of the revelations about the mother were a bit… meh. Unlikely, or unnecessary.

Zoe is still with her family but her house has been destroyed and she also has to be honest with her friends. I found some aspects of Zoe’s life believable but others not – there was veering between responsible and not that annoyed me.

Look, this isn’t a hard book to read, so it’s not like you’re devoting days of your life to it. I did end up skimming some sections because the conversations got a bit boring and I just wanted to find out how things resolved. But I am also not going to tell someone not to read it: it’s not terrible, it does have interesting and somewhat diverse characters (ish), and it has some interesting things to say about family and friendship that I largely liked. So I didn’t love it but I also didn’t loathe it. Ultimately it’s not really a book aimed at me – I am too old and have rarely enjoyed the sort of over-the-top drama this revels in, even when I was the age this is intended for – and that’s perfectly ok.