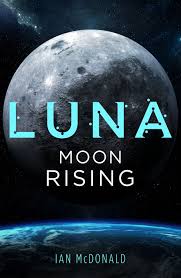 This book was sent to me by the publisher, Hachette, at no cost. It’s out now.

This is the third and final book in Ian McDonald’s Luna series, and it really doesn’t stand alone. New Moon and Wolf Moon (which apparently I didn’t review? must have been when I was stressed out) are both outstanding and terrifying and if you are interested in near-future, near-Earth speculation, with intensely human characters and scheming dynasties, you really want to read the whole series, so off you go.

There are spoilers for those first books, kinda be default, in what follows…

One of the awesome (and, ahem, anti-Ian McEwan) things about this series (and it’s not unique to it, of course) is the way that McDonald uses this alien, will-kill-you-in-a-moment place to work through human issues of greed, family, ambition, hope, friendship, pride… all of those things that storytellers have been mining for millennia. You’ve got battles happening with rovers and spacesuits in vacuum, and parkour in 0.6g (ETA: which is actually 1/6th gravity, not 0.6, ARGH thank you Scott), and as wide a range of marital and familial ties as can be imagined… and brutal corporate takeovers and arguments over inheritances and burgeoning romance. It’s so full.

Perhaps the most intriguing speculation of a near-future type is the way that McDonald imagines the Moon being regarded by Earth. The Moon is not a political entity; it’s a technological colony, for want of a better word, dominated by families who happen to come from different nations on Earth but who have little in the way of political or emotional ties to those places. But the Earth needs the resources of the Moon… but the families don’t want Earth interference… So Lucas Corta’s deal, to use Earth mercenaries and involve Earth politicians in the dealings of the Moon… that’s really quite problematic. I LOVE IT.

A few characters I really enjoyed:

Wagner Corta, the wolf, and his sort-of-bipolar playing out differently on the moon from how it might on earth. I like that McDonald refuses to ‘diagnose’ him fully, although I would be very interested to hear what those with a better understanding of mental health descriptions and experiences think of this. I also greatly appreciated the enormous dilemmas and sacrifices he goes through in the series, in terms of conflicting priorities.

Luna Corta: I kept forgetting just how young she was because of how much she had gone through, escaping with Lucasinho and so on, and she continues to be buffeted by issues beyond her control in this book… although she begins to show that she can take some control.

Ariel Corta: continues to be one of the weirder and least predictable of all of the main characters. Ignoring family on the one hand and working hard for them on the other, never an easy person to get on with, driven by astonishing determination and stubbornness… I’m not saying I’d like to be friends with her, because I think she’d terrify me in person because she’d see all my weaknesses. But she’s definitely someone to admire.

That makes it look like I’m all Team Corta, and I’m not really, it’s just that they feel like they dominate the book, and indeed the trilogy, more than I expected from the events of the first book.

If you’ve read the first two books you know the issues that need to be resolved in the book. If you’re anything like me, you won’t anticipate how it will play out. I was surprised by most of what happened. I will admit that the very ending was… really not what I expected. I’ve had to think about it a bit, but I think I see what McDonald was doing. And I’ve decided I like it.

This is a magnificent series and I’m so glad it exists. Now I can’t wait to see what else McDonald does.