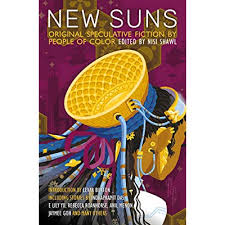 Octavia Butler once said, “There’s nothing new under the sun, but there are new suns.” And thus, New Suns: Original Speculative Fiction by People of Colour, edited by Nisi Shawl. It’s a remarkable set of stories: varieties in genre and tone and settings and characters. Some of the authors are people whose work I’ve come across a bit (E. Lily Yu, Andrea Hairston) while many others I was only vaguely familiar with – and several whom I’d not heard of before. Which is generally a good sign, in an anthology, for me anyway.

I’m not going to go over every story, because that would be boring. I want to mention a few highlights to give a sense of the range of stories.

Minsoo Kang’s “The Virtue of Unfaithful Translations” hit my history-teacher heart right in the middle. I love way it’s told – as an historian or archivist finding out more and more information – and I love the story that’s told through that information, and I ADORE the ‘Marginal note’ at the end for the way it cuts through and kinda sums up a lot of what historians of marginal communities have been doing for several decades.

“Burn the Ships” by Alberto Yáñez also hit me in the heart, but for different reasons. When I read in his bio that he “draws on his Mexican and Jewish roots” to inform the story, I could absolutely see the parallels; it’s not a re-telling of a story from either of those cultures, or a combining, but… using their histories, of conflict with The Other especially, to come up with perhaps the most emotional of all the stories in the anthology. It’s just incredible.

Indrapramit Das’ “The Shadow We Cast Through Time” is a non-linear narrative that looks at the consequences of human settlement on alien planets, how societies shape themselves in response to danger – and vice versa – and the connections between people. It’s gorgeous.

“Harvest,” by Rebecca Roanhorse, is horrifying. I’ve now read a couple of stories that involve deer women, and I already know enough to never tangle with one willingly.

If you’re looking for a non-themed anthology and you want to know who’s hot right now in speculative fiction, you should pick this up.