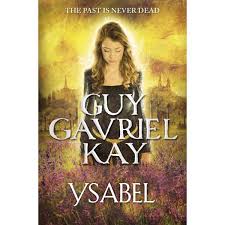 This is my first GGK and… I really don’t know what to make of it.

I mostly really liked it as I read, although there were some odd narrative quirks – like the omniscient narrator occasionally breaking in with prescient predictions about a character later reflecting on something as the end of childhood – that didn’t seem to have pay-off or point in the narrative. But those things aside I largely enjoyed the story as a whole… until the very end when something very weird and out of place happened that made me feel a bit ick about the whole thing.

Anyway, before that: Ned is in France with his photographer dad; meets another visiting American and has a weird encounter with a dude which then leads to more weird encounters and a progressively weirder journey around bits of France. There’s a love triangle ranging over enormous sweeps of time, eternal enmity, races against the clock, family secrets and family discoveries, and some slightly dubious mashing of history.

In general, I found the story generally enjoyable. I’ve no idea how accurate the geography of France is; apparently it was written while Kay was there, so hopefully there wasn’t too much licence taken? Overall the characters were interesting and plausible enough, and the pacing generally wasn’t too bad. It’s not a book to think too much about, though; the history aspect in particular is a bit silly and there are a few narrative holes that made me shake my head.

Also I hate the title. And I’m a bit bemused about it winning the 2008 World Fantasy Award for Best Novel. I don’t recognise the other nominees, but this … seems like an odd choice.

The big thing that irks me, though… (spoiler…)

at the end, when a 25-year-old woman has been rescued, she basically tells a 15 year old boy that she’ll sleep with him for his next birthday as his reward. Just noooooooooo.