As a rule, I don’t gravitate to romance novels. I have a complicated relationship with them: I absolutely grew up rejecting the idea of them as being too femme, and I didn’t want to have a bar of that… even while knowing that I enjoyed a well-written romance in whatever books I was reading, or film I was watching (yes, I would watch Empire Strikes Back with just the Han/Leia scenes). As I grew up I realised what I was doing and finally started thinking more sensibly about romance as a genre. It will still never be my go-to genre, I think; while I have enjoyed romance/SF, for instance, I do prefer the balance to be on the SF narrative rather than the romance.

However. Every now and then someone recommends a romance novel to me, and I give it a go, and I have hugely enjoyed them. The Brothers Sinister series by Courtney Milan, for instance, was just lovely: the romance is the centre of each book but around it is a meaty, thoughtful and engaging narrative. (Although I haven’t read the last one, because the term suffragette wasn’t coined until about 1903, and the book seems to be set at least two decades too early.) And that’s what I like, it seems; a romance where the surrounding plot is as strong as the romance. Maybe there’s lots of stories like that; perhaps I’m continuing to do a disservice to romance – I have read a few where that’s not the case, but maybe I was misled by the person who gave them to me. 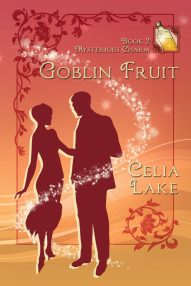 ANYWAY. The whole point is to explain that when I say I’ve read four books by Celia Lake in about a week, that’s a pretty serious recommendation from my perspective. The Mysterious Charm books are largely centred around the New Forest, in the 1920s. It’s a world where magic exists but those with magic keep pretty separate from the non-magical. It doesn’t seem to be as strict as in JK Rowling’s world, but it’s still significant. The date is a clue to some of what is significant in these books: it’s post WW1 Britain, with the issues that implies: returned soldiers with physical and mental ailments, people grieving their lost ones, survivors struggling with that, and so on. It’s also clear that Lake was influenced by Dorothy Sayers – in fact she says as much, and one of the books is very much a Lord Peter Whimsy story – and the story around the romance in each of the books is some sort of a mystery. There’s an archaeological story, there’s a mysterious drug story, a smuggling story, and a reappearing house story; in each, the pair who will end up involved have to figure out what’s going on. The magic is generally pretty low-key, but essential to the story.

The books aren’t perfect; there are a few idiosyncrasies in the writing style that bugged me at time, mostly around use of commas! But they’re not detrimental to the story. In each, the protagonists generally go chapter for chapter, so the reader gets insight into both sides, which I really enjoyed; there’s no agendas hidden from the reader, and while there are of course obstacles to true love, these are cosy stories, so you don’t have to be worried about where it will end up (not saying I was burnt, but I’m thinking of you, Roman Holiday, and I’m still angry). (These are also stories akin to the Mills&Boon ‘Dare’ or ‘Blaze’ imprints – relatively sexually explicit.)

The first story is “Outcrossing” and while I did think it was adorable I would honestly suggest starting with Goblin Fruit, because it was a meatier and generally more intriguing story. The four that are out so far are intertwined, with some of the same characters popping up, but there’s no real spoilers – if you know that things are going to end well for the characters anyway, it doesn’t matter if you see them happily together in a different book.