If on a Winter’s Night a Traveler… 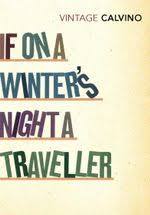 I don’t often read books because I ‘should’ – unless they’re ones that I ‘should’ read before the Hugos, maybe – because I rebel against being compelled to read something when my list of to-be-read books is already one that I will never complete. (Why yes, this is somewhat ironic given my occupation.) This one, though… a number of people recommended it; at least one of Kim Stanley Robinson’s novels makes reference to calvinos; and then in the most recent episode of Galactic Suburbia, Tansy mentioned that it bore a passing similarity to another book I’d read, in being a book-within-a-book. So I thought it was time to get into it.

I am quite sure there are lots of deep, thinky pieces about this novel. It’s a book deliberately and self-consciously exploring the very idea of reading, and what books mean, and what authorship means and how it functions. Something like half of it is written in the second person; the first chapter tells you you’re about to start reading If on a winter’s night a traveler and therefore you should relax, find a comfy spot, tell people to turn the tv down, and so on. Why yes, thank you, I was on the couch in a quiet room with my feet up. Also, the description of what it’s like to venture into a book shop – with those towers of books glaring at you, the Books You’ve Been Planning to Read For Ages making alliance with The Books You’ve Been Hunting For Years Without Success – was an all-too-accurate description of why I prefer buying books online.

The pronoun from the previous sentences is deliberate. Calvino very clearly situates the Reader as male. Unsurprisingly, I (as female) found this alienating. Obviously I still read the book but I’m quite sure it wasn’t nearly as immersive as it might have been for a male reader. Added to that is the consistent objectification of women throughout the book which I also found alienating. The “Other Reader” is female, and she only exists “as the Third Person necessary for the novel to be a novel, for something to happen between that male Second Person and the female Third, for something to take form, develop, or deteriorate according to the phases of human events” (p166). Which… yes, I understand, interaction between characters is generally seen as necessary in a novel. But this feels all too much like ‘the woman only exists for the benefit of the man’ – surely Calvino could have figured out a way of talking about characters that didn’t seem to suggest something about gender relationships! And the women who appear in the books that the Fictive Reader comes across also only exist as sexual objects. So all of that was disappointing, to be honest.

… despite all of that, Calvino really is doing interesting things with the ideas of narrative and reader expectations and authorial integrity and so on. The Reader (who is never named, oh the joys of being A Universal Being) quite surprisingly goes on a journey to follow the trail of books he encounters in partial form, and there’s never any real explanation for how that has come about – so motive, and cause and consequence, are (at least partly) thrown out the window. The Actual Reader never develops much of a sense of any of the characters, so characterisation: not important? (I certainly never cared for the Reader as my avatar within the pages. I’d rather imagine myself as Pratchett’s Librarian.) And with the openings of several books presented but not developed: continuity, farewell.

I don’t regret reading this. I don’t think I’ll read it again. Will I recommend it to people? … perhaps. People who are interested in novel structure, and the possibilities of fiction, would probably be intrigued.