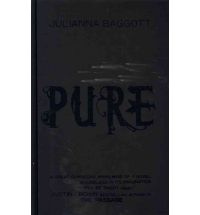 The cover is as difficult to look at IRL as it is here. I like it, it’s clever, but I do wonder whether it will be detrimental to the cause.

This is unashamedly a dystopia – an post-apocalyptic one even – set in the not-too-distant future. Pressia lives with her grandfather in the ruins of (I think) America, where day to day life is a struggle: for food, for shelter, and not unnaturally for any sort of meaning to life. Not only has infrastructure been destroyed and food contaminated, but the people themselves have been intimately changed by the probably-nuclear destruction a decade or so before. Pressia was holding a doll at the time of the detonations; along with scars and other injuries, its head is now her hand. And she could be said to have got off lightly: consider those who were walking a dog. Or holding another person.

This is the truly breathtaking, and the truly frightening, part of Baggott’s worldbuilding. Her conception of how people might learn to cope with surprising, disfiguring and debilitating changes to their bodies is clever and largely sympathetic. Of course, it’s not like there isn’t precedence for this, since people in our world do exactly the same. There are some people that she imagines as pretty awful, but being part of a ‘Groupie’ – an amalgam of multiple people – would likely send anyone mad, so it’s not surprising that they would be vicious. I was especially fascinated by the Dusts, people who have melded with the ground in some way; it’s a horrifying thought and Baggott fortunately does not overuse them, keeping them instead for relevant moments in the story. The question of how these melds could possibly function is only lightly touched on in the story, but I didn’t find that detrimental; it’s a bizarre concept but it’s become such a normal one for Pressia and the others that I, at least, got swept along by that acceptance.

Pressia’s point of view is countered by that of Partridge, who lives inside the Dome: a place of refuge which protected some lucky people from the detonations, and where they continue to live without fear – of the environment anyway. These are the ‘Pure’, because they are still pure human beings, unlike those on the outside. The different reactions of people on the outside looking at the Dome, and vice versa, is nicely captured by Baggott: the variation of adoration to hatred seems quite plausible. It’s not an original idea, and reminded me particularly of some of Sara Genge’s stories from a few years ago (“Shoes to Run,” especially, if memory serves (which it may not)), because of its depiction of the people outside wondering about the people inside. Anyway, Partridge may have a life of food and education but of course not everything is hunky dory. His family life especially is a mess, for a variety of reasons, and he is growing restless – something living in a Dome can’t really cope with. Interestingly, there’s not really one major crisis that makes Partridge finally act, but a series of small ones, like pebbles leading to an avalanche. And an avalanche there is, and Partridge ends up outside the Dome.

Pure could be split roughly into thirds: the first third, worldbuilding and characters; the second, bickering and a few new characters; the last third (actually a bit less) crazy crazy action. I really enjoyed the first part, because the world is intriguing and horrifying and different (at least outside the Dome) and Baggott realises the daily routine stuff quite nicely. I wasn’t especially fond of either Pressia or Partridge, but that didn’t stop me from enjoying their adventures and interactions with others. The second third, however, definitely dragged. There is some action, and some fascinating new characters such as El Capitan, who even gets his own point-of-view chapters. However in general it felt like a lot of to-ing and fro-ing that didn’t advance the story sufficiently for the space it was given. There are some interesting character moments, especially for Pressia, regarding temptation and the easy way out, but they weren’t sufficiently capitalised on. Finally, the last 100 or so pages (of 434) rushed by seemingly at light speed, as revelations were made and discoveries unveiled and yet more characters came on the scene to have a Really Big Impact. While this was an improvement over the middle, it left me with a rather unpleasant sense of confusion, and of being rushed.

I definitely enjoyed this novel, almost exclusively for the worldbuilding; however I don’t think I will be rushing out to buy the sequel, should it be published (this is the first of a ‘projected’ trilogy).