The State of the Art: verdict = poor 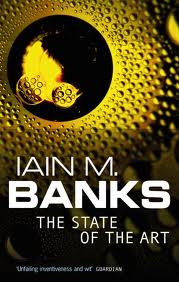 I was quite disappointed by this collection, unfortunately. It lacked any… panache.

“Road of Skulls” is hardly a story, barely a vignette – seems like a riff on Waiting for Godot without the existential angst. The last couple of paragraphs are clever, bit they made it feel more like a prologue to a novel than a standalone story.

“A Gift from the Culture” is about someone having left the Culture to live on a normal planet, and then getting blackmailed to do something only a Culture person could do. It had a lot of potential – how a relationship might work with such a disparity of backgrounds, how someone from the Culture might respond to being blackmailed… but in the end it did not live up to any expectations.

There’s another vignette in “Odd Attachment,” where a first contact scenario is played out from the point of view of the vegetative alien, who would rather being thinking about his lady love, actually. Amusing enough, but not exactly mind-blowing.

The story that had the most impact on me was probably “Descendant,” entirely focussed on one man, his thoughts and his interactions with his spacesuit as he trudges around a barren little world trying to find the one settlement on it, after being blown out of the sky. Melancholy in a readable way.

I found “Cleaning Up” a bit frustrating, because while it had a fun premise – alien gifts start appearing on the earth, how does the West deal with it when the Soviet is still a threat, etc – the characters were so unpleasant as to be almost unreadable.

The absolute lowlight for me was “Piece.” Less a story and more an anti-religion diatribe. The author is recounting two experiences of having been the oh-so-intelligent and smug atheist intellectual confronted by two religious nuts, over the span of 15 years; one an old man, a Christian who dislikes science, the second an otherwise intelligent Muslim man (this is the perspective the reader is presented with) who objects to The Satanic Verses. The conclusion may be trying to suggest that it’s not quite as obvious as the protagonist is suggesting, but it does nothing to redeem the story.

The second last story is the novella “The State of the Art,” another piece about the Culture. Here, the Culture comes into contact with – wait for it – Earth, in 1977. The focus of the story is on Sma and her experience of Earth, as well as her interactions with some of her fellow Contact personnel and the ship Arbitary. While it was interesting enough to consider how the Culture might view Earth, especially perhaps at that time – Apartheid going strong, genocide in Cambodia, war in Ethiopia, etc – in the end it once again felt more like an excise for a rant about everything that is wrong with the world, wrapped up in a story that only just better than average. If I sound bitter, it’s because I am – I expected way more from Banks. Maybe I was setting the bar too high; maybe the short form just doesn’t work for him.

The last story is “Scratch,” and I didn’t really read it for the same reason that I haven’t read the last twenty or so pages of Joyce’s Ulysses (well, also I just didn’t get up to it): stream of consciousness does absolutely nothing for me, and when it’s several people’s worth of consciousness, even less.

So there you go. Disappointed.