Woman on the Edge of Time 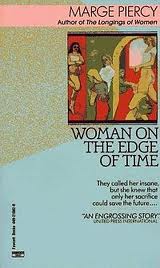 This book… blew my mind. It’s angry, and demanding, and confronting, and seriously amazing. It’s also not at all what I was expecting, but that’s quite ok.

Connie Ramos has been committed to a mental institution (again) in the mid-1970s. Perhaps the first time she ought to have been there (although maybe not…), but this time she doesn’t. Which doesn’t make any difference to the authorities, who view her – as a woman, a previously incarcerated person, as a Chicana, and with powerful male figures banded against her – as unreliable and someone To Be Dealt With. Her experiences within the institution are demeaning and seem aimed at dehumanising her and her experiences. What makes this even more unbearable is the thanks Piercy gives at the start, “to people I cannot thank by name, who risked their jobs to sneak me into places I wanted to enter… the past and present inmates of mental institutions who shared their experiences with me” – her fiction is, then, not fiction at all, but a reflection on reality. And that is heartbreaking, if (tragically) also not surprising. Her experiences within the institution – begging for treatment for injuries, the cold carelessness of the staff – are heightened when a doctor chooses her to be part of an experiment in ‘curing’ certain mental ‘problems’ (like aggression – particularly in women – and being gay). This is not an easy read. It is a sobering and worthy one, though.

… but hang on. This doesn’t sound like the sort of thing she usually reads! Oh yes. Connie is also in contact with someone from the future (150 years ahead, or so). Luciente first speaks to her and appears in Connie’s time, but they then discover that Connie can go through to Luciente’s time, and experience what life is like then. Piercy does a wonderful thing with this future society in not making it utopian, tempting though I’m sure that would have been. It is certainly better than the America of Connie’s experience – enough food for everyone, a broader understanding and expectation of family and care, no capitalism – but there are problems, such as jealousy and anger, still. And indeed there are aspects which Connie finds quite unacceptable, especially in their broadening of the maternal role, which she sees as women having given up their only claim to power. Here, the idea of family is a negotiated one, and multiple partners take on the role of breastfeeding; someone who is tied too closely to another (as we would expect from life partners) is deemed to have overstepped society’s boundaries. Of course, the contrast between Luciente’s experiences and Connie’s makes Connie’s all the harder to read.

Connie is not the easiest character to read. There are times when she was frustrating precisely because she fits so much into the mould that society wants her to fill – I can’t fault her for that, but I wasn’t even born during the times she is experiencing, so there was of course a part of me that just cried out for her to rebel, please! For your own sake! – which I understand is totally unfair, but nonetheless it was there. Luciente is a slightly easier character to read, even though it’s through the lens of Connie and her experiences; she’s far closer to what I am used to reading about. This disjunction between the characters, and my reactions to them, was a really interesting aspect – and, I admit, added to the discomfort of reading, which led to its own interrogation.

This is a book which interrogates power on the basis of gender, education, race, and perceived place in society. It shows power as constructed, it shows power to be dangerous, and it shows that power shared is more useful power. It doesn’t claim to have all the answers, but it certainly suggests that things could be substantially better. And that today’s world has the power to bring about change… or not.