Summary: in which James Bond is back to fighting SPECTRE, often underwater. We’re back to being worried about atomic weapons, and the problematic nature of plastic surgery. Also, Nassau means bikinis, baby. Yeh. 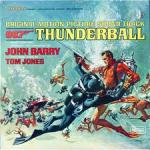 Alex: This Bond moves firmly back into the SF zone with James Bond escaping from some villains at the start of the movie with the help of a jetpack. Seriously, the thing is straight out of the Jetsons. But because he is with A Girl, the jetpack is only useful to get him over a wall to the waiting car; then it’s into the DB5 and up with the bullet-proof screen. The prologue is a classic whack-a-villain sequence; in this instance the only immediate indication we have that the villain is such is that he is cross-dressing in an awesome blonde wig.

I love Tom Jones. This theme song is up there with my very favourites.

This movie sees Bond back to battling SPECTRE – and just like before, if you missed the one and only explanation for what SPECTRE stood for, tough cookies. Once again, Number 1 has no face, but he does have a ruthless streak as wide as the electric chair he utilises on someone who appears to be skimming proceeds. We’ve got a new Number 2: Largo, who proves to be a key player in this film. He has an eye patch. He is therefore, by default, evil.

Most of this film is again set in foreign locations – it opens in France and moves to Nassau – but there is a fairly long stretch in a sanitarium, where Bond is recovering from his last adventure. This involves canoodling his physical therapist. At least, he wants it to; she protests in rather strong terms, which nearly made me cheer. Then he is nearly killed while on a torture-rack-cum-massage-contraption, and in return for him not reporting her… well. Pretty sure that qualifies as blackmail, sir. You are a cad. The sanitarium also sees Bond just happen to come across a man who has been killed, who turns out to be someone else’s doppelgänger… which ends up being the key to the entire mystery. But I get ahead of myself.

While Bond is having massages, a NATO team is out flying a training sortie that involves two real live atomic bombs. Our doppelgänger has killed the real pilot and taken his place, then gasses the rest of the crew while they’re flying around. So he helps SPECTRE steal the bombs. But SPECTRE don’t really want the bombs for themselves – although they’ll probably detonate them anyway; it’s all about blackmailing the British government. For ONE HUNDRED MILLION pounds. (I can’t help but be reminded of Austen Powers.) And the way the government will signal that they agree to the plan? By making Big Ben strike 7 times, at 6pm.

I love the British.

Anyway, off to Nassau; Bond meets the dead pilot’s sister, who is Largo’s mistress and called Domino because she’s always in black and white; he eventually solves it all and they all live happily ever after. But there are some interesting things to comment on along the way… like the fact that Largo keeps sharks, which means I get to reference another XKCD comic! Also that he does not utilise the sharks that well, because Largo falls into that classic Bond pattern of the Gentlemanly Villain. There were so many opportunities for Largo to kill Bond, but when he’s come for lunch it would be soooo rude to push him into the shark pool, don’t you know.

Also in the Bond pattern: a new Felix Leiter! This time a fella who looks like the poor man’s Clint Eastwood, in sunglasses. Q turns up, in a Hawaiian shirt that hurts my eyeballs, and he and Bond go way beyond sparring into evincing quite withering dislike of each other. This hurt my heart a little. Bond’s main assistant in Nassau in female, and black. Naturally, she dies.

Bond gets around quite a few laydees in this film. One of them is with SPECTRE – Fiona – and I quite liked her. I particularly liked her when, after having sex with Bond and then the goons turn up to capture him, she totally calls Bond on that trope that I’m not allowed to name. Bond is snide and says he did it for King and Country, and she is contemptuous of the idea that sleeping with him would make her switch allegiance. Of all the unexpected things, Bond got meta on itself! I nearly cracked up when that happened! And then she died. Because Bond moved her into a bullet (again. This is a habit).

The one thing that really spoiled this film for me was the underwater fight scene at the end just going on toooo long. I’m guessing it was all new and exciting technology, but… it got a bit wearing. I was hoping for some fun when the sharks turned up, but even they were a bit boring.

Hey James, that underwater grenade scene. Would that actually have been as bad as Bond makes out?

James: Yes, water is incompressible so explosive underwater = very unpleasant and direct impact.  Also … The nuclear bomb labelled “Handle like Eggs”? love it.  I have to say, as a young man I enjoyed the underwater fight very much (which I have seen very many times), but on the re-watch it did rather drag on – 2.5 Martinis.