The Tombs of Atuan

While there’s a similar feel in the language – sparse and intense – this is a very different book from A Wizard of Earthsea. It’s bound to just one place; it’s focussed on a girl. The struggle for identity is similar but Tenar/Arha has less agency than Ged, which is understandable given her very different situation. There’s very little magic.

I might love this more than A Wizard of Earthsea. 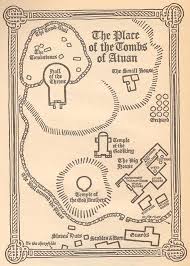 It’s so… peculiar. It’s simple enough to find parallel stories – mythic ones, modern ones – for Ged, since he is basically a young man finding his purpose and his way in the world. It’s a coming of age story, if not ‘simply’. For Arha though… the situation is different. It’s still a coming of age story; it is about Arha finding her purpose and place and understanding the world. But it’s focussed so tightly on the Place that it feels completely different. Is there a difference in a girl coming of age and a boy? Certainly in terms of myth there is, and Le Guin is, I think, interested in writing Myth in these stories. In fact she makes some quite obvious comments about mythology; we know, in A Wizard of Earthsea, that Ged goes on to become something great (how’s that for foreshadowing and reassurance?), and that there are stories about him. Arha is basically living a myth.

I’m fascinated by Arha. I love Le Guin’s exploration of the fact that she is a wilful young girl – and who wouldn’t be, being told that they are the First Priestess reborn, and basically untouchable by any of the people around her? When you are so set apart from those around you, it makes sense that you would become aloof and indifferent. And yet Arha is also vulnerable; she fears Kossil, the High Priestess of the Godking, but also relies on her. She is overcome by her fear of the dark, when first taken to the Undertomb, and then overcomes the fear in turn. I can imagine that, left to her own devices, she would have become quite formidable… within the restricted space she can access.

This is a claustrophobic novel. Where A Wizard introduces the reader to many parts of Earthsea, this one only really allows us to see one remote, nearly forgotten, temple complex. And yet the plot itself doesn’t feel that constrained, perhaps because – for most of it – Arha doesn’t notice it. It’s a testament to Le Guin that she makes such a small area so intensely powerful and important.

I had forgotten how much I love this book. In fact, perhaps I didn’t used to love it so much, and this is a reflection of greater maturity… I guess I read this in early high school, and I don’t think since. Onwards to more Le Guin!