It’s official. I like the Tenar-focussed books more than the Sparrowhawk-focussed ones. Don’t get me wrong – I adore Ged, and I love the quests and the excitement of A Wizard and The Farthest Shore. But there’s something wonderful about Tenar as a character, and there’s something wonderful about the more inwardly-focussed and (is this silly?) more relatable stories of Tenar’s life, that makes my heart ache with joy. 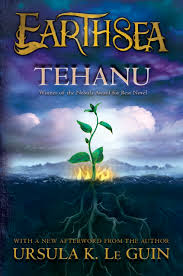 I can only imagine the wild joy that Tehanu must have been greeted with when it was released in 1990, 17 years after The Farthest Shore. Intriguingly, it begins before that story has finished – there is a problem with magic, and eventually Ged is delivered to Gont by the dragon Kalessin, but that’s not even the start of the story.

The story really begins with The Tombs of Atuan, and more even than The Farthest Shore continues A Wizard this is basically the second half of Tenar’s story. We skip the bits about being a wife and a mother… I don’t believe that’s because Le Guin sees those bits as unimportant, but perhaps because this bit – the being a widow stage – allows for more freedom of story, and even perhaps because this bit is told less often. There’s an ironic comment at some point about how once she got old, Tenar disappeared to men’s eyes. I adore how much this story is about being old, and getting on with life, and old =/ dead.

So Tenar is a widow, and she’s in charge of her dead husband’s farm because her son is off being a sailor, and she takes in a young girl who has been left for dead after being severely burnt. There’s a lot in the story about perceptions of physical appearance – whether through age or this sort of physical impairment. There’s also a lot about why men (humanity in general I suppose, but the major focus is on men) do what they do, and the child’s situation is emblematic of all of this. As is Tenar’s steadfast, generous, stubborn heart in caring for Therru as her own. Ged does turn up, eventually, but he doesn’t take Tenar on adventures. This time, he is drawn into her world, in an inversion of their first encounter. This time, it’s he that’s struggling with his identity and his purpose in life, and Tenar who takes him in hand.

There is adventure, of a sort – nasty men and even an encounter with the king – but they’re blips in an ordinary life, a brush with celebrity. The very end of the story is a different matter (which: !!!), but still the resolution is in keeping with Tenar’s desire for an ordinary life. There’s more interest in goats, and spinning; in peach trees; in small-town relationships – especially between women – and understanding changed-but-the-same friends. I have to say that in writing in this I experienced a twinge of concern, that perhaps I’m not selling this to – yes, you guessed it – male readers. And then I realised how I was feeling and nearly despaired. Of course I think men should read this, in the sense that I think everyone should because it’s saying such deep things about life and because it’s written so gorgeously. If men – and indeed women – choose not to read this because they think they only enjoy adventures, well, their loss.

Because Le Guin is saying a great deal about ‘real life’ in this book. In her discussion about where power lies, and what power is; about the relationship between men and women in terms of power and trust; about motherhood and what it means; about the nature of knowledge; and perhaps even a suggestion of how to live ‘the good life’.These themes are another way in which the continuity between this and The Tombs is evident. I don’t particularly like some of what she has to say about men’s and women’s power, and I’m not sure that I’m even meant to agree with or like it, but it’s still intriguing.

I adore this book.

Comment on revelation about Ged: SPOILER!!
I am deeply fascinated and intrigued by Le Guin’s revelation that wizards are essentially sexless – neutered in some way by magic. Hmmm, the terminology here may get me in trouble. At any rate, he’s basically not experienced adolescence. I can only imagine that she was asked whether Tenar and Ged had had sex in the boat en route to Havnor, and this is her explanation of why not! It’s a very cunning way of helping to partly explain the lack of women on Roke – that is, no wives or girlfriends – as well as reassuring the readers about wizards not using their powers for manipulation.

Galactic Suburbia 115: in which we are five!

It’s our birthday! (We’re on iTunes or at Galactic Suburbia.)

What Culture Have we Consumed?

Alex: up to date with Saga (in trade); The Chimes, Anna Smaill; A Wizard of Earthsea, The Tombs of Atuan, The Farthest Shore, Ursula le Guin; Etiquette and Espionage, and Curtsies and Conspiracies, Gail Carriger.

Tansy: Spider-Gwen #1, Companion Piece, Fangirl Happy Hour #4 (Renay’s rant on female characters & agency)
Please send feedback to us at galacticsuburbia@gmail.com, follow us on Twitter at @galacticsuburbs, check out Galactic Suburbia Podcast on Facebook, support us at Patreon (http://www.patreon.com/galacticsuburbia) and don’t forget to leave a review on iTunes if you love us!