You know that thing where because you read so much of one genre, you keep expecting non-genre books to follow the same conventions? 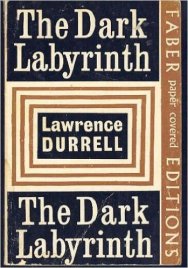 I know the Durrell family from having read My Family and Other Animals by Gerald Durrell at school, and then reading several more of his memoirs off my own bat. It’s quite funny to realise that the moody older brother Gerald remembers turned into, apparently, quite a well-known author.

I think I took this off my parents’ bookshelves many years ago and I’ve never got around to reading it. I have finally done so as part of a concerted effort to get through my to-be-read pile, which I started… last week.

This was published in 1947 (my copy is from 1969). I kind of feel like I need to better understand post-war Britain before making claims about this novel… but actually that’s not the case. Certainly I think Durrell is making some pretty specific comments on British society of the time; but he’s also making comments about humanity more generally that are still applicable today.

The story: a bunch of random people, some with tenuous connections and other not, come together to go explore a labyrinth on Crete as a day-trip from their Mediterranean cruise. The first chapter is written in the aftermath, so we know right from the start that there’s been an accident and some people haven’t survived – I was surprised to see this narrative technique in a box written 70 years ago, to be honest, and was quite confused initially (it’s one of the aspects I now love about it). The rest of the novel gives some background to most of the characters, and then details their experiences within the labyrinth.

I should stop here and say I really loved this book. Occasionally the style made me impatient – some sentences were a bit too opaque for my tastes, and I couldn’t quite figure out whether Durrell is being serious in his misogyny or whether he’s being ironic, since I think both options are equally plausible. But this book is staying on my bookshelf, since I can well imagine rereading it (also my mum might be sad if I ditched it).

Durrell himself said the novel was

really an extended morality but written artlessly in the style of a detective story. Guilt, superstition, The Good Life, all appear as ordinary people; a soldier on leave, a medium, an elderly married couple (Trueman), a young unfledged pair, a missionary…

(in a letter to Henry Miller). The variety of characters – yes, many of them tropes – is of course what allows him to explore different attitudes and ideas and problems. The main character, or at least one of two who gets the most airtime, is a mediocre poet-cum-wannabe-critic who has just been drifting for years. Born to some money, never really had the inclination to hold down a job or be properly the starving artist in the garret; not great to his wife; and so on. In contrast, the other character with the most time is Baird, who has come to Crete to try and lay some demons to rest – the difference between the two men is stark. The other single men of the group – the medium mentioned above and an arrogant artist – provide some colour. There are two women: the missionary, who is severe and generally angry and disapproving, and an uneducated young woman trying to better herself. The “elderly” married couple – and it hadn’t even occurred to me that their name is Truman! – are really a package deal throughout the novel and may be my favourite part of the whole story. Certainly their eventual story is the most captivating. They are generally looked down upon by the artists and “better bred” members of the group (they won the opportunity to go first-class on the cruise) but there are simply wonderful moments that make them incredibly real. Like someone walking past their room one night and hearing her crying, and him saying “There, Elsie… I know things would have been different if it hadn’t died.” And then there’s no further explanation.

For all its universality, this is a novel of its times. People are still deeply affected by the impact of World War 2. The medium, Fearmax, has had a basically reputable career as such. Notions of class, while beginning to unravel, are still very prominent (and perhaps they are still in Britain but I think it’s more pronounced here). Psychotherapy is an intriguing notion and people can’t quite figure out whether to view it as science or quackery. That doesn’t mean you need to understand 1940s Britain to get the novel; it just means that understanding these people live in a basically recognisable but actually very different world is an important thing to keep in mind. The past: they did things differently. Even in novels.

As to my earlier comment: there is no fantasy element to this story, even though it really felt like there should be, at times.