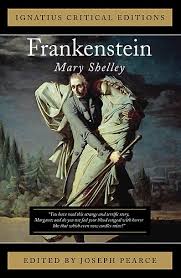 I have now read Frankenstein. I’ve never had the impetus to read it before; I never studied Gothic literature, and it’s just never been bumped up the to-be-read list. But a few weeks ago someone at church read it, and waxed so lyrical in wanting to have a pop-up book club to discuss it (as a sequel to one last year on The Book of Strange New Things) that I agreed… and here we are.

I had a general knowledge of the story – that Victor created the monster, who then implored his creator to create a mate for him, and then the monster killed Victor’s bride. I knew there was something to do with the Arctic but I didn’t know why. So to be honest, I wasn’t really expecting to be particularly surprised by the novel. And in the broad outlines, I wasn’t, but in some of the details I certainly wasn’t.

I had no idea that the story was structured as a story within a story, with Victor relating his tale of woe to Robert as they sat stuck in the ice in the far reaches of the Arctic, who is then relating it by letter back to his own sister. I don’t think that particularly changes the story itself but it’s intriguing to see Shelley using this conceit as the excuse for why, and how, the story is being told – that she wasn’t just writing a third-person omnipotent narrator watching and relating all the events. Instead, this allows Victor to include his passionate remonstrances and remembrances, and for Robert to include his own reflections at beginning and end.

Side note: I would have liked more about Robert. Did he get home? Why was he so passionate about finding what was in the extreme north? I wanted more than just what he told his sister!

And so Victor. I really did not like him, and I think this is partly to do with the way Shelley writes him – the flowery, impassioned speeches are not really my cup of tea, especially not when they seem to go a bit. But it’s also because actually, most of my sympathy is with his creation. Victor brings this creature to life and then abandons him. He does nothing that either God or father – depending on how you want to read the story – owes to offspring. And if Victor saw him as such an abomination, he ought to have had mercy and ended its life. Instead Victor comes over all self-indulgent and just leaves his creature to find his own way in the world. I think Victor’s imprecations of his own guilt in the deaths of his loved ones is meant to be read as him taking on too much, but actually Victor? Yes, you are responsible for the deaths of William, and Justine, and Elizabeth.

I do have some sympathy for the man – of course it’s horrible to see the fruits of one’s labours turn sour and to lose so many of those closest to you. But it’s impossible for me not to see this as consequences of his own actions that he could have dealt with right at the start.

My sympathy for the creature is enormous, and the way this story sets up judging people by appearances is horrific. I have no idea whether Shelley herself believed in the righteousness of class and blood determining your place in society (I doubt it), but the world within the story is all about that.

Another side note: The description of how different Elizabeth is, as a child, from the peasant children around her was appalling – blonde makes you better, and there’s some indefinable aura to you if you’re ‘well-bred’. This also applies to how the creature views Agatha and her brother and father; even though they’re living in penurious circumstances, there’s just something about them that makes them precious little snowflakes. And it’s their blood.

Anyway, the creature. He could have been good, he could have been wonderful and loving, he could have used his strength for good (and occasionally did)… but instead humanity is awful and abused him with no cause. Clearly this is a critique on such attitudes (well I hope it’s intended as such), but it was still really unpleasant to read and just cemented for me my Team Creature attitude. Team Victor can go jump.

The story itself… pared of Victor’s woe-is-me-ness, I did like it and there were bits that

surprised me. Of course I knew that my cultural knowledge of the Frankenstein story is coloured by filmic versions (I think the only Frankenstein interpretation I’ve actually seen is Young Frankenstein…), but I was somewhat nonplussed that there was no description of how the creature was made and animated. I think I assumed that there had been some explicit reference galvanisation (rather than just a reference to lightning) and a bit more description of the process. It makes sense in the context of the story why there isn’t – I think not sharing the process is the most sensible decision Victor makes for the entire story – and it fascinates me just how much the myth of Frankenstein has accreted details that now seem indispensible in cultural memory. Who invented Igor?

I really hadn’t expected Victor to die at the end – at least, not of exhaustion. That was probably the most surprising part of the whole story. I liked that it allowed the creature the final word, even if that word is a promise that he will now go self-immolate because without a creator there is no point in continuing to live. The creature, for all his murders, comes across as ultimately more noble (in my eyes) than Victor. The creature might have been driven by revenge, but so was Victor.

I know there’s heaps of scholarship on this story and its meanings (you don’t get to have a story with the subtitle ‘A Modern Prometheus’ and avoid it). What little I’ve come across has discussed the story as Victor creating to replace God, and Victor creating to replace women. Having read it I think both of these are really interesting perspectives. The creature himself makes references to being Adam, and the ideas of sin and redemption, the creature likening himself to Satan (but at least Satan had companions), and so on, are things I’ll have to think more about. The maternal stuff is also intriguing. That Victor’s mother dies early and is always regarded as an angel; that Victor and Elizabeth don’t even get to consummate their marriage before she’s murdered; all of these must be awesome fodder for scholars. Again, needs more thinking about for me, and makes me glad I’ll be talking about it soon.

I’m glad I read it. I can’t imagine the impact it had at the time it was published – I don’t really know nineteenth century literature very well but I know that this was unusual. And especially to have come from the pen of a woman. You rock, Mary Shelley.