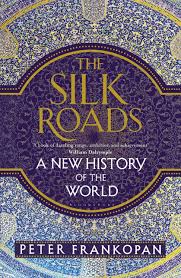 This book was sent to me by the publisher, Bloomsbury, at no cost. It’s out in September; RRP $29.99.

This is one of the finest history books I have read in recent times. It’s also probably the first book I’ve read that calls itself ‘a history of the world’ that does not mention the Norman invasion of England. And that’s because in 1066, from the perspective Frankopan presents here, a wee island on the west coast of Europe was of absolutely no relevance to the movers and shakers of the world. (Henry VIII is barely mentioned either!) The real business of global activity was in what Frankopan calls the real heart of the world – the lands of the Silk Roads, from the Himalayas to the Mediterranean, which for the two thousand or so years covered here drove human history.

Now, that’s a big claim, but what’s a history book without a big claim behind it? and of course important things were happening in places like Britain in the 11th century – but things of regional importance, not things with world-changing impact. Frankopan’s thesis is that the areas connected by what came to be called the Silk Road had an impact on actions, thought, and policy across most of Europe and Asia and, eventually, the Americas and Africa as well. Sometimes this area is actively driving history (the beginnings of Christianity and Islam, anyone? – and Judaism too although it doesn’t start in the period covered) and sometimes it’s – not quite passive – but almost: that this area happens to be incredibly oil-rich isn’t anyone’s fault or decision, but the reactions to it are.

Each chapter of the book is centred around the theme of roads: the road of faiths, to a Christian East, of gold and silver and black gold and genocide. It’s blunt about the horrors perpetrated – so much slavery – and waxes lyrical about the beauties produced by various cultures. Islam and Christianity and Judaism are shown cooperating, although rarely all three together, as well as antagonistic – for religious and political reasons (throw Zoroastrianism in there too, and indeed Buddhism).  There are countless invasions – sometimes repelled, sometimes welcomed, sometimes hugely resented; there are alliances and back-stabbings and intermarriages. Most of all, though, there is trade. Trade along the Silk Road – from China and indeed further east, all the way to that insignificant island on the west coast of Europe, and of course within the regions along it too. The impact of Chinese pottery on the Dutch. The impact of silk and gold and – of course – oil, as well as innumerable other goods, back and forth, is mapped out by Frankopan. Not quite half the book is basically from 1900 onwards (the chapter is called ‘The Road to War’), which I know makes sense in terms of the availability of sources; the medievalist in me was a bit sad, I’ll admit.

I am guilty of having a Euro-centric view of history. Partly this is my education and upbringing which have in turn led me to be most interested in European history, especially British and the ‘classical’ worlds. I have a bitser knowledge of events involving Persia across the ages and the regions of Central Asia – usually as they intersect with those areas I have studied (Alexander the Great, the Huns, the Mongols). More recently I am absolutely guilty of falling into the complacent trap of thinking of Central Asia, in particular, as being a war-torn area that is to be pitied (HELLO privilege). To see this area’s history presented chronologically and with a focus squarely on it, the actions taken by people in the area as well as those acting on it; and to see the actions involving Iran and Iraq and Afghanistan and Pakistan and Egypt, and Britain and the US in particular, over the last five decades or so – this was an absolute revelation. For those who are more interested in modern politics perhaps this won’t be quite so eye-opening, but I imagine that for most it will still be a revelation to have all of the pieces fitted together and the connections between them pointed out clearly and cogently.

Reading about the actions of the British Empire made me embarrassed to be Anglo, at times. The sheer arrogance on display was truly remarkable.

The aesthetics: if I could have a framed copy of the front cover, I probably would. It’s gorgeous. Inside there are two sets of eight pages of colour pictures – which isn’t as many as I might have expected from such an epic book, but they were a reasonable overview of the content. I have a copy of the trade paperback; it’s a hefty tome: I didn’t quite manage to not put creases in the spine, which is an indication of how hard it was to read without opening it fully! (Yes I am that person; crease my book’s spine and I will crease you.) It’s 520 pages long (with another 100 pages of footnotes) – so it’s not a fast read, but it’s definitely a worthwhile read.

This book is a must-read for anyone interested in world history, or in modern history. It should be read by any politician or policy-maker who thinks they can make decisions about any part of the world other than their own without consequences. It should also be read by anyone with a tendency to Eurocentrism. It’s a study in well-written history, too.