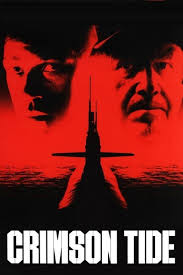 Every fortnight (ish)* my beloved and I are watching a film by either Ridley or Tony Scott. We’re watching in chronological order. There are, of course, spoilers.

A: The captain of a US nuclear missile sub is as powerful as the president of the US or Russia? Really?

A: the setting: a Chechen ‘rebellion’ and Russian government has been suspended… civil war in Russia, basically. OOH Cuban missile crisis analogy. And starting with a kids’ birthday party is NEVER a good sign, man. Never.

A: The CO (Cranky Gene Hackman) interviewing a new XO (Serious Denzel)… already possible cracks appearing (former raising an eyebrow at the year at Harvard…) – and then jokes from other officers about the captain going through XO. That’s what we call BODING. END_OF_DOCUMENT_TOKEN_TO_BE_REPLACED