My copy claims that Sheldon died shortly after completion of this book. WOE. 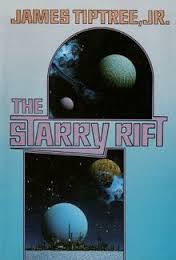 Confusingly, the quote on the front of my copy calls this a science fiction novel, which confused me immensely since I thought Tiptree only wrote two, and I have read them both. Anyway, it became a bit clearer as I read: this is three short stories linked together by the idea of two students asking a librarian at the Great Central Library of Deneb University, for help in their research on humans. So you could tenuously see this as one, 1001 Arabian Nights-style narrative, but I think that’s stretching it a bit..

Anyway, the three stories do all centre on humans; in the first and third, it’s humans in conflict with aliens – new aliens – and in the second it’s human on human violence. They are, despite the conflict, surprisingly positive stories about humans overcoming difficulties. All of the stories take place in or around a place called the Rift: an area of space that is relatively empty of stars, and therefore planets – which, pre-FTL, makes it hard to navigate through (something about needing landmarks, I think).

The first story is definitely my devastating favourite. “The Only Neat Thing To Do” got a number of accolades when it was published, and they are well deserved. Coati Cass is 16, space-mad, and has just been given “a sturdy little space-coupe” for her birthday. So off she goes exploring… and of course, runs into something unexpected. The nobility that Tiptree imagines for Coati, and the realism of her voice, are both just wonderful.

“Good night, Sweethearts” is an interesting story of identity, celebrity, loss and starting over. It’s a good story but it doesn’t really stand out for me.

Lastly, and longest, is “Collision”. This story is told both by humans and by the aliens with whom they are coming into contact; the conceit is that this story has been constructed through interviews with participants. There’s a human exploration team, and there’s bad humans called Black Worlders who have been doing some nasty things, and there are aliens who are getting angry at humans… The blurb says that “explorers cross impassable chasms of language, biology and hallucination to prevent a new age of war,” which about sums it up. Like I said before: surprisingly positive.

Overall this may not be quite the strongest of Tiptree’s work, but it’s still damn fine and should be read for “The Only Neat Thing To Do” anyway.

Bonus note: referencing your own work (Brightness Falls from the Air) to make sure it’s clear these stories are in the same world. Good work, Tip!