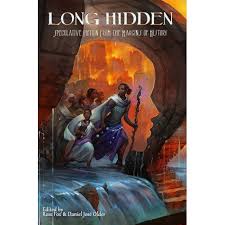 A book that celebrates the marginalised throughout history. The women. The black. The brown. The queer. The trans. The freaks.

I loved this anthology. I at least liked, if not loved, every single story.

Every story is set in a historical time and place: parts of the Americas, Asia, Africa, Europe. They deal with real instances of marginalisation and oppression: sometimes minorities within hostile communities, sometimes systemic social oppression. In each story the characters are those whose stories have tended not to be told in Official History – at least not until the last few decades, and still slowly at that. In some cases the stories are triumphant; in some cases the stories tell of loss and woe. But almost always there’s an element of optimism, or hope. That through oppression, defiant humanity shines through. That despite others trying to remove that humanity, the marginalised know that they are human, and deserving of dignity. Even if in this instance, they’re not accorded it. I found it an unexpectedly uplifting anthology.

It reminded me of Cranky Ladies of History, for its agenda of shining light into often unlit areas of history. But the difference is that this is consciously speculative fiction about the margins. Most often that’s expressed as magical ability of various kinds, rooted in real religious systems or within individual humans; or there’s the occasional science fictional element. Sometimes it’s zombies or shape-changing, or magical/otherworldly creatures. Sometimes the speculative element is central to the story, and sometimes it’s just there, part of the world. It’s always done well.

Everyone should read this anthology.