And we’re back to Great Scott! 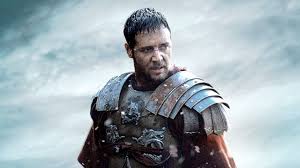 James has never seen it before; Alex hasn’t seen it in a very long time.

A: Opens by telling us how mighty the Roman Empire is at its height – ¼ of the world’s population!!! Marcus Auerlius is about to fight the last of the ‘barbarians’… and then we cut to a hand in the wheat, and then Rusty in furs on a battlefield. OOH FOREBODING.

A: I like the movement from focused on one man to then showing the entire army. It’s a lovely effect. And the Roman army does look appropriately awesome.

The different accents from the actors is going to be hilarious across this film.

A: I like how dirty this film is, in battle especially.

J: Ruuusty, sounds like he’s just had a couple of cans down the local pub… ‘At my signal, Unleeash Hell’ … Is he auditioning for Croc Dundee ? He couldn’t sound more Aussie.

A: What an inspiring speech, General Rusty: if you find you’re in a nice place, good onya, you’re dead!

Ooh flaming arrows. I swear this could almost be reshot just slightly and it would be Agincourt. Or Lord of the Rings. Although it is a very nice testudo from the centurions.

J: Sadly the battle footage has nothing on Braveheart or the modern standard of Lord of the Rings et al.  Rather too much slow motion, wide shots and not enough battle.

A: I agree about the slow-mo, but there’s quite enough battle for my tastes. And a lot of blood. Oh and more slow-mo. And sad violins.

A: aaand now we’re with the people who don’t have to get dirty. Furs and blue clothes and Joaquin, you are not looking well; meanwhile in his dirt and grime, all General Rusty wants as a reward for winning is to go home. And the acclaim of the army for General Rusty does not make Prince Joaquin happy. MORE FOREBODING. All this talk of home is dangerous.

A dysfunctional family… and a dying Caesar regretting his military career. General Rusty wanting to hear that people fought and got hurt and died for a Grand Purpose, and that Purpose is Rome. Aurelius is moping. Well, I guess he’s allowed to do that, since he’s dying.

And now Marcus, the bastard, asks I Want To Go Home Rusty to become Rome’s protector… to give Rome back to the people.

A: This is building on the earlier joking discussion about Senate v Emperor… Marcus is suggesting Rome should go back to being a republic, to get rid of the corruption. Not really convinced that would or could have worked.

Rusty, though, he’s a Moral Upright Fella: not acceding to the princess’ clear come-on, praying for his family, only wanting to return to them. Compare that to Prince Joaquin’s unhealthy interest in his sister…

J: Awww, the young fella is gonna have a sook.

A: Well, he does feel like his father has just completely abandoned him and refused to let him have the whole world.

A: If you don’t love me, I will kill you. (Also that statue in the background would absolutely have been painted in the Roman era.)

A: Moral Rusty is betrayed by his friend and must be killed by Evil New Caesar, because he’s too much of a threat. But Rusty manages to trick his would-be executors! What a surprise! (40 min in and the main character dying? Whatevs.)

J: Horse riding, Spanish flamenco music… Rusty on the run.  And we’ve moved to the set of a western.

A: And now his family has been attacked. Is There No End To That Man’s Evil?

J: Timelapse, Slow-Mo, Fast-Mo – very unlike any Scott film we’ve watched yet.  The visual pallet and shooting style of this film is really varied or inconsistent – I can’t quite decide which yet.

A: You fall down in a faint, of course you get picked up by slavers. It’s only to be expected. And now we’re in… northern Africa? (Yup, this is intended to be modern Algeria.) I thought Rusty was meant to be Spanish? (Yup, that is confirmed a bit later.) At any rate, help from a Helpful Black Fellow means that Rusty’s wound doesn’t go septic. (And the slaver was the prison guard in The Mummy.) Doesn’t help him with his haircut though, which is tragic. Proud Rusty is silent. And refuses to fight… YET.

And scratches off his SPQR tat… OH SYMBOLISM, “is that the sign of your gods”? (Rusty gives a Sardonic Grin/Grimace.)

J: Pffft easy bluff, get sent into the arena as fodder and kick some arse…

A: Rusty and Helpful Black Fellow chained together to fight in the arena; they do kick some arse, and show the benefit of Teamwork.

J: Maybe I’m just a Tony Scott man – cause this film isn’t doing much for me… slow, convoluted…

A: You don’t appreciate the Epic Nature of the Roman Empire.

J: Yet the film is also totally predictable… it’s like watching in slow motion.  There is more than 90min to go!

A: Caesar Joaquin and Senator Derek Jacobi having a tussle in the senate. Princess Lucilla is formidable though.

Joaquin claims to know what the people want. He orders 150 days of games. Senator Jacobi says: that’s clever. The people will love him for the blood left on the Colosseum sand.

ARE YOU NOT ENTERTAINED?

J: Not really … Michael Bay might have a lot to answer for, but at least his films have some pace.  Ridley is the master of sloooow.

A: This has pace. It’s just not as fast as you like.

I like the recreated architecture. Also this actor-fellow’s very spectacular eyebrows.

A: (little private joke there about things being re-creations…) And now General Rusty has his fellow gladiators working together as an army unit. And now the “Carthaginians” are beating the Romans… awkward…

A: oooh Emperor meets gladiator on the sand and Caesar Joaquin is Shocked and Appalled to discover General Rusty alive!

A: He is only saved from summary execution by the people in the audience demanding that he be allowed to live! What. A. Surprise.

And now Lucilla is trying to convince Moral Rusty to look after Rome by killing Commodus, but Noble Rusty is having nothing to do with it. Or her.

And now we have literal bread and circuses. Ah boy. Maximus is faced with the only undefeated gladiator… and a bunch of tigers… but of course he wins. The crowd, and the emperor, demand the death of Titus; Moral Rusty refuses. And the crowd loves him. And Caesar Joaquin is truly evil.

J: Yup, signature Hans Zimmer soundtrack – could just as easily be the climax of ‘The Rock’.  Back to young Joaquin – sooking.

A:  And now we get the politics… Noble Rusty agrees to use his army to get rid of Commodus, Senator Jacobi is dubious about his willingness to not become dictator in Commodus’ place. But of course Rusty’s Great Nobility is convincing.

… which is then grossly juxtaposed to Commodus’ enormous lack of nobility. And morality.

Random and irrelevant kissing… all right, not entirely random, since the princess has been wanting to kiss him all movie, but still: irrelevant. Like, why would Moral Rusty kiss Lucilla now?

Their plot goes to pieces, of course, because Caesar is a paranoid as well as everything else. Which this time serves him well. The gladiators die in trying to buy Noble Rusty time to escape, which is very sad. Commodus is being very mean to his sister.

A: Power sooking indeed: challenge the gladiator but stab him in the back first.

J: Well he is a little sniveler, so what would you expect.  Ridley makes good films, but they are about 30% too long, and 30% too slow.  Tony blows more things up.

A: … this is a true fact. Not that many explosions here.

And now it degenerates to a fist fight as they’ve both lost their swords, and the original betraying soldier finally does a righteous thing.

Noble Rusty kills Emperor Joaquin, in the gladiatorial arena, thus doing massive violence to the historical record. Of course, his job done – and his family already dead – Noble Rusty must also die. Leaving Lucilla to mourn, and pick up the pieces.

Overall… well, I think Ridley is trying to be a Cecil B deMille. Maybe trying to do a Ben Hur, although without quite so epic a storyline, as far as I’m concerned.

J: The film had its moments, but it’s only about 3 stars.