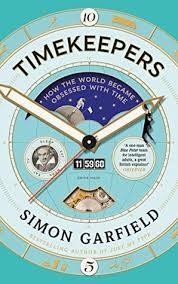 Even if you’re not that history books, but you are a keen observer of the world and how it works, this is a book I can highly recommend.

There were times (heh) when reading this that I wasn’t quite sure what book Simon Garfield was trying to write. Some of the things that he writes about didn’t immediately appear to connect to the idea of time. But when I considered the blurb, I decided that Garfield did indeed know exactly what he was doing. This is a book that considers the idea of time from a multitude of angles: “our attempts to measure it, control it, sell it, film it, perform it, immortalise it, re-invent it, and make it meaningful.”

I really, really enjoyed this book. Garfield writes in lovely, sometimes whimsical ways – not that his ideas are less than scientific when required, but that he has a lovely turn of phrase to make some difficult concepts approachable. And I really did enjoy the different ways that he approached time. I already knew about trains and train timetables essentially necessitating the development of time zones, but I didn’t have a problem with it being reiterated; I adore that he included discussion of the French Republican calendar and its attempt to decimalise, rationalise, time. Including questions of the metronome and how to play Beethoven’s Ninth and why a CD fits as much as it used to is just marvellous, and the question of just how many times someone can be shown, in film, hanging from a clock is one I had never considered. Also, the idea of a film that goes for 24 hours and is comprised of snippets from other films that together make 24 hours, each shown at the appropriate time of the day? Madness and genius have rarely been so close together. And that’s barely scratching the surface of the ideas that Garfield explores: how to make a watch, the four-minute mile, the modern drive for efficiency… yeh. This is a varied, delightfully jumbled, exploration of a topic that consumes a lot of modern Westerners.

Garfield is not suggesting he’s written the definitive book on time; far from it. There’s a wonderful Further Reading section that I’m afraid to look at because this is a rabbit hole I could very easily fall into. But it is a good introduction to pointing out that time is a lot more subjective, and invented, and dependent than we sometimes think.

Reading this is a good way to spend some time. 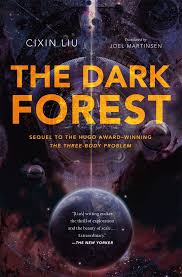 Book 2 of Cixin Liu’s trilogy that started with The Three-Body Problem.

You could probably read this without having read the first book – it’s been ages since I read Three-Body Problem and I didn’t remember a whole heap – but honestly, why would you? It’s such an amazing book that if you’re considering reading these at all (perhaps because the third one has just been nominated for a Hugo Award, which the first book won), seriously just go and read both of them.

So the world is going to be attacked by an alien space-navy… in four centuries. Meanwhile emissaries from those aliens are already here, because somewhat hand-wavy-science, and they’re both halting humanity’s exploration of science and potentially listening in to every single conversation we’re having. So what can be done to try and deal with the aliens, and not have them sabotage humanity’s plans? (The aliens have their human tools, of course, too.) You nominate four people to be Wallfacers: people who have authority to do anything as long as they justify it as “part of the plan”… and they don’t have to explain anything, because if they explain it then the aliens might find out.

Because nothing could go wrong with that plan.

And that’s only part of what this novel is about. There’s also love and loss and trauma and sheer human effrontery. It takes place in the near-isa future and then a few centuries after that. It mostly takes place in China with a few bits elsewhere. Lots of it is from the perspective of Luo Ji, who would really rather it wasn’t, thanks all the same.

Some of the things I really enjoyed and/or was intrigued by:

This is a great science fiction novel and I’m completely stoked for the third, although I can’t really fathom where it’s going to go. Do not read this unless you prepared for some pretty hard-core science discussion, and if you’d rather that your fiction has in-dpeth discussion of character motivation and lavish character reflection. Do read if you enjoy a brilliant SF story with breathtaking ideas.

In which we feed our feedback back to you, with a side order of cheesecake! You can get us from iTunes or at Galactic Suburbia.

WHAT’S NEW ON THE INTERNET

Please send feedback to us at galacticsuburbia@gmail.com, follow us on Twitter at @galacticsuburbs, check out Galactic Suburbia Podcast on Facebook, support us at Patreon and don’t forget to leave a review on iTunes if you love us! 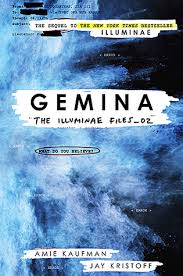 This is the sequel to the brilliant Illuminae. Intriguingly, though, it could definitely be read as a stand-alone book. There’s an entirely new set of main characters, and while the events do flow on from the initial ones they’re taking place in a completely different part of space. What little background knowledge might be useful is provided as part of the briefing documents.

Note: if you didn’t enjoy Illuminae (and I understand the style isn’t for everyone), don’t come to this one.

Like Illuminae, the novel is composed of ‘found’ documents, here presented as part of trial. Those documents are things like IM-chat transcripts; descriptions of video surveillance, complete with occasional snarky comments from the tech doing the description; logs of emails, and other communications; and a few other bits and pieces. It means that the narrative isn’t entirely linear, and this works really nicely – the story of what has happened, and what the characters are like, comes out slowly and… I guess organically. There’s a few bits where people are described in reports or get talked about, but in general we learn about them through their words and actions.

The setting for the main narrative is a space station, guarding a worm hole that has gates to several different systems. Something terrible happens, and things must be done by unlikely heroes. Exactly the depth of the Terrible Things and how they might be resolved are the focus of the story. There’s crawling through air vents and unlikely alliances, hacking both computer and physical, general death and destruction and mayhem, betrayals and banter. And it all happens over a really short space of time so that it feels quite desperate and breathless; when I had to put it down 50 pages from the end to go out for dinner (I’d read the rest of it that day), I was horrified at leaving everyone hanging.

This is an immensely fun book. I can imagine it working on reluctant readers – or those who think they only like graphic novels – once they got over the thickness of it, that is, since it’s a very graphic piece of work: each page is designed to look like what it’s meant to be, whether that’s a chat transcript or legal documents. Or excerpts from an adolescent girl’s diary. Each ‘chapter’ feels short and punchy because none of the documents are very long. It’s a clever pacing trick.

A very entertaining and enjoyable book. I am excited for the next instalment.

A while back I started a food blog, Acts of Kitchen. It then turned into a podcast of the same name, where I interview people and talk to them about food and cooking and such things.

Now, I have put it on Patreon. There’s rewards like challenging me to make things, the occasional food or postcard delivery, and recipes being emailed to you. Check it out!

WHAT’S NEW ON THE INTERNET?

Also the Nommo shortlist (from the African Speculative Fiction Society)

Alex: New York 2140, Kim Stanley Robinson; the Ancillary series, Ann Leckie; season 2 and most of 3 of Person of Interest; Last Cab to Darwin

Please send feedback to us at galacticsuburbia@gmail.com, follow us on Twitter at @galacticsuburbs, check out Galactic Suburbia Podcast on Facebook, support us at Patreon and don’t forget to leave a review on iTunes if you love us! 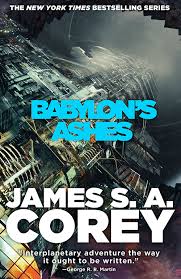 In theory it took me months to read this, because I read the prologue… and then I put it down. Then I read the first two chapters… and then I put it down. And I read like 30 other books and then I finally picked it up and read it. This is no reflection on the book or the series; I’ve been waiting for this book since I finished book 5. I think partly this was a concern that the book would be too much; that after the events of book 5, how could things POSSIBLY go well for my beloved characters? And there’s an intensity to Corey’s writing, too, that I just didn’t feel ready for at the start of this year.

But I finally got over all of that and I read it and of course it’s fantastic and by golly I want book 7 yesterday. I had wondered how on earth the series could be continued… but now it’s clear. Well, as clear as the combined minds that make James Corey can ever be to someone out here.

(Spoilers for the first five books, I guess)

Things I continue to love about this series:

This book is, of course, not an entirely easy or pleasant book. Terrible, terrible things happen. I was constantly worried, at the back of my mind, that THIS would be the book where Corey decided to screw up the crew of the Roci. Of course that nearly happened in the last book, and I had a lot of trouble dealing with my darlings all being in different places; maybe that was a softening up to deal with one of them… leaving? Dying? And then of course there’s the worries about the solar system, and Earth as a whole being devastated, and the Belt being in huge difficulties too… so while it’s not quite apocalypse level (well, aside from Earth, but there’s not so much focus on that in this volume), this is still not a book to read if you’re feeling particularly fragile. That said, it is still a great story, and of course the point of the whole series is human endurance and dealing with enormous difficulties.

I love this series. 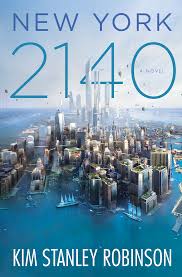 I adored Kim Stanley Robinson’s 2312 and after reading this I have an overwhelming itch to go read it again. Partly because this reminded of that earlier work, and partly because it reminded me just how very good Robinson can be (as I thought of 2312).

As the name suggests, the book opens in 2140, and is set almost entirely in New York. There’s been catastrophic sea level rise, due to melting polar ice mostly, and of course this has had a huge impact on coastal towns. While Manhattan isn’t quite an exemplar for all coastal cities, it does provide an intriguing setting for such a book – and of course New York is, as the narrative acknowledges, a very particular and, perhaps, unique city in terms of how inhabitants and others around the world relate to it. Sydney probably wouldn’t get you quite such a response.

Things I loved about this book: