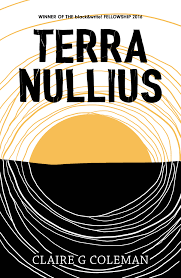 Terra nullius has a specific resonance for Australians who know anything about their history. It’s the legal fiction under which Britain decided they could colonise the land that’s now Australia, because it was ‘nobody’s land’ – that is, no one that the British recognised owned it. Because the British didn’t recognise the traditional owners as ‘owning’ the land, for a whole bunch of reasons. So for Claire G Coleman to use that as the name and premise of her book is brilliant, and pointed, and tells you a lot about what the book is on about before you even open it.

Coleman, who identifies with the South Coast Noongar people, won the black&write! writing fellowship in 2016 with this manuscript. The main reason why I think that’s awesome – aside from the obvious one that it’s a great book – is a bit spoiler-y, and that’s a bit of a problem with discussing this book at all…

The blurb talks about Natives, the Colony, and Settlers. It says “This is not Australia as we know it. This is not the Australia of our history. This TERRA NULLIUS is something new, but all too familiar.” Along with the fact that this is a didactic book (in no way a criticism) that does its message-work with clear prose, understandable characters, compassion and a lot of toughness… I can’t really say much more about the book without revealing what makes it something other than a book about Australian history. There’s runaways and enforced schooling and hiding from Settlers and Settlers complaining about the environment… and… other things.

I want to throw this book at all white Australians. And I would be fascinated to hear what non-Australians think, especially people living in other colonised lands. I don’t know enough about how that’s spoken of elsewhere to know whether the resonance would work in a non-Australian context… but I think there’s enough commonality for it not to be a completely foreign experience.

And now, for those of you who don’t mind spoilers: