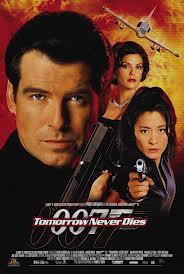 Summary: in which Michelle Yeoh is more bad ass than Pierce Brosnan, and the Bond franchise moves with the times to realise that the media can be more terrifying than lone wolf assassins.

Alex: I love the opening to this film. M and various military people are watching a ginormous screen showing a Russian illegal arms bazaar, courtesy of some unnamed-but-we-know-it’s Bond British agent. Once they have confirmation that some important dude is there, the ranking admiral calls in a missile strike and M gets incensed that her man hasn’t had time to get out. And then Bond points out that he’s looking at a nuke OH NOES! Bond then steals the plane and the nuke. Natch. It’s a seriously awesome opening with good dialogue, good tension, great stunts. It sets the film up really nicely… although it actually doesn’t suggest the central premise, which is the power of the media.

The next scene doesn’t flag the media either: a British naval ship is overflown by a Chinese MiG saying the ship is in Chinese waters. Cut to a Scary Stealth Sub with a scary drill, and it turns out that someone is manipulating both the Brits and the Chinese. But then – oh then – we get a scene that’s basically a throwback to Blofeld: a white-haired man directing operations from a secret high-tech base, telling the men on the sub to kill the survivors in the water. What’s different here is that he’s writing headlines as he does it.

Elliot Carver. Oh, Elliot. You are so clearly meant to be Rupert Murdoch – or maybe that’s just my bias flashing. In my memory he was a bit more subtle than he turned out actually to be; Jonathan Pryce basically chews scenery in some parts of this film. It’s all about the eyebrows. It’s also how he’s written (so he’s like Jessica Rabbit?): this is a man who is pleased when new software is released deliberately full of bugs (so stereotyped Murdoch + stereotyped Bill Gates?), as well as bribing the US president to lower cable rates. And his biggest problem, what makes him act like a petulant little boy, is that China won’t let him play in their media space. BOO HOO. So he’s setting up a confrontation between the British and the Chinese, hoping that things go very badly and a Chinese general in his pocket will end up in charge. So… kinda like some other villains we’ve known, I guess, but this time rather than hoping desperately that people – world leaders, etc – will notice what he’s doing, Carver goes straight to the masses with his newspaper/media conglomerate. I really, really love this concept.

The women? I’ve already mentioned Michelle Yeoh. She is so, so cool. She gets one awesome lone fight scene which is fantastic; she has 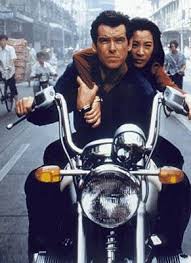 some great gadgets (walking down the side of a building, anyone?) and Bond acknowledges her as an equal. The scene with Bond and Wai Lin handcuffed together but riding a motorbike is a magnificent stunt set piece – and I especially love that it ends with a potentially provocative outdoor-fully-dressed shower scene… and she leaves him handcuffed to the shower. Did I mention she’s an agent of the Chinese equivalent of MI6? Intriguingly though the film reassures us that she’s not really a Communist; she specifically says that she doesn’t even own a Little Red Book. I don’t think they ever felt the need to reassure us about the Russian ladies not being Communist; China is somehow more scary? Who knows. I was sad that Wai Lin did indeed end up kissing Bond, but I guess I can’t have quite everything.

Bond can though; he starts off with revitalising a fling with Paris, now Elliot Carver’s wife and played by Terri Hatcher. This role always disappointed me, because Paris is just a pawn to be used by both Bond and Carver to their own ends. Bond’s regret for her ending up dead doesn’t make up for any of that.

And then there’s M, and Dench continues to bring the goods. Possibly my favourite exchange of the entire film:

Admiral Roebuck (played by Dench’s on-screen lover in As Time Goes By): “With all due respect M, sometimes I don’t think you have the balls for this job.”

M: “Perhaps. But the advantage is I don’t always have to think with them.”

This film wasn’t quite as good as I remembered, but it’s still enjoyable and has very few cringeworthy moments.

James: The height of modern technology, a Nokia clamshell ‘smart phone’, dates the gadgets in this Bond somewhat – Bond can however drive the car with it so that’s quite cool.  It is still one of my favourite modern era Bonds, a nice balance of humour, gadgets and action.  Why oh why does Bond (especially Brosnan it seems) have to tip off the villains that he knows (albeit with clever puns about being all at sea etc)? 3 Martinis