Sourdough and Other Stories by Angela Slatter has been on my radar for ages, but somehow I’ve just never got around to reading it. For a while I didn’t realise it was available as an ebook – and Tartarus Press does lovely hard copies, but they’re a leedle expensive for a book you’re taking a chance on. And I also wasn’t sure that these stories were ones that I would really connect with. I mean, yes, I loved “Brisneyland by Night” in Sprawl, and a few others Slatter has written – especially with Lisa L Hannett – and Midnight and Moonshine made me cry with its beauty, but… I just wasn’t sure. And then I found out that Slatter had a set of ‘prequel’ type stories coming out, so I thought I should read those first. 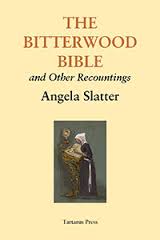 Halfway through reading The Bitterwood Bible and Other Recountings, I finally bought myself Sourdough because there is no way I can now not read that collection. Because I am absolutely an Angela Slatter convert.

The stories collected here are not quite a mosaic in the same way that Midnight and Moonshine are. There, each story was clearly connected – most often by family, which made it seem a generational saga. Here, while there are a couple of stories that feature the same protagonist, a few more with recurring cameos, and most set in the same place or with the same background characters, it’s more like a series of stories set in a couple of distinct suburbs or small towns. Of course you’re going to get the same bars, or neighbourhood characters, or landmarks mentioned; that just makes sense. But the narratives themselves aren’t necessarily connected… although sometimes they are. And these locales that Slatter has invented are very believable. They’re well-realised, and they’re familiar in that fairy-tale sort of way. Because these are indeed a sort of fairy tale. There’s not a whole lot of magic; what there is is generally a quiet, dare I say domestic without it being in the slightest derogatory, magic; no flashiness or gaudiness here, no winning of wars. That would draw too much attention, and drawing attention in these stories is generally A Bad Thing. The women – and the protagonists are almost all women – mostly want to be left alone, to get on with their lives. Sometimes they’re forced to interact with the world, or with other people, that they’d rather not; because they need to achieve some specific goal, or because they’re being manipulated, or they otherwise have no choice. But you certainly get the feeling that most of them would just prefer never to be in the limelight, not to be a household name… not to stand out.

There are scribes and poisoners, seamstresses and pirates, teachers and coffin-makers and servants. They are mothers and daughters and child-free and orphan, young and old and neither; rural and urban, rich and poor. They have varying degrees of agency and control, varying chances of living after and of living happily ever after.

This review is part of the Australian Women’s Writers 2014 challenge.