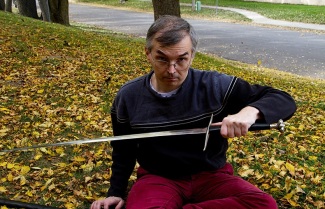 An ex-pat New Yorker living in Minnesota, Paul Weimer has been reading sci-fi and fantasy for over 30 years. An avid and enthusiastic amateur photographer, blogger and podcaster, Paul primarily contributes to the Skiffy and Fanty Show as blogger and podcaster, and the SFF Audio podcast, as well as other places. If you’ve spent any time reading about SFF online, you’ve probably read one of his blog comments or tweets (he’s @PrinceJvstin).

You’ve got a story coming out soon in Fox Spirit Books’ Eve of War – congrats! What’s it about and how does it feel to be in this anthology?

Actually the anthology is out now! The Eve of War anthology, a follow up to the TALES OF EVE anthology, looks at women in combat and war.

My story is called “The Crossing” and is a low fantasy sword and sorcery fantasy about a commander faced with the difficulty of defending a kingdom already on the ropes against an enemy that…well, that would be telling.

How does it feel to be in such an anthology? I don’t write enough fiction, and my fictional path is much slower than my non-fictional path. So it feels good, very good, to be in an anthology with the likes of Juliet McKenna and Adrian Tchiaovsky, among many other worthies.

A lot of people were sad to see SF Signal close, a venue that you had a lot to do with and which Australians often felt supported by. How are you feeling about this change, and has it actually changed the way you interact with or think about the SF scene yet?

I am still coming to terms with the loss of SF Signal. It was sudden and surprising, even to those of us relatively on the inside. I had been part of SF Signal for over 6 years at the time of its closing. Although The Functional Nerds had been the first venue to, in the words of Hamilton, to give me my shot, it is at SF Signal that my voice found audience, with Americans, Europeans, and as you say, Australians. And in turn, especially through Mind Melds, I became more connected with people across the world.

I do feel that the loss of that major venue has changed my voice, somewhat, and its a void in the community. SF Signal WAS a major clearinghouse for a lot of SF news and information, as well as having features of its own. Not having it there as a hub has made my personal mission of linking stuff on the internet a little harder, and its made me realize how fragile this community can be when a major venue goes silent.

As part of SF Signal you wrote essays and engaged in the genre really thoughtfully. Do you have plans to keep doing so?

As a matter of fact, YES. I’ve written one essay already for Tor.com, and I am also doing work for BN Sci Fi. And of course, I write reviews and columns for Skiffy and Fanty. SF Signal’s departure from the scene means that my work is more spread out, but looking at my to-be-written pile, it’s not reduced. If anything, I have more to write than ever!

Although they came out a few years ago, I’ve been delving into the early Pellinor novels of Alison Croggon (recommended to me by author Courtney Schafer). I’m happy to broaden my horizons, as most of the fantasy I’ve read out of Australia has been by men (Ian Irvine in particular). So as part of my mission to read more women and support women writers, getting in an Australia connection keeps me up on the work at the antipodes.

Also in that vein, there is fantastist Ben Peek, whose The Godless and Leviathan’s Blood are extremely interesting epic fantasy. How can I, map lover and digital map maker, resist a book with a cartographer as a main character?

Does the anthology work of Jonathan Strahan count? If so, I have been lately extremely enjoying his anthology work like Reach for Infinity and his Best of the Year series, and I am looking forward to digging into his big fat anthology on Alastair Reynolds soon.

Long plane trips are not something I enjoy, and only take when I have no other choice (like my November trip to Rome, and my 2014 trip to London, and when I go to Helsinki next year). Being stuck inside a flying box is not my idea of a good time. So if I had an author to sit next to me and talk to, and keep my mind off of the rigors of plane travel, that would be most excellent. I’d want someone intelligent, well spoken and personable. And someone whose work I love, so that at the very least I can talk to the author about that. So I’d go with Octavia Butler.

Crossposted, along with all the other 2016 Snapshots, to the Snapshot blog.