A lot of people write stories with disparate threads – multiple narratives – that then end up all coming together somehow. 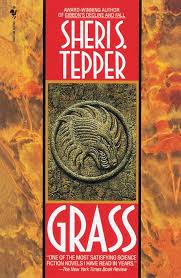 If you want to know how to do it really well, you need to read this book.

It’s set on the eponymous planet, where ‘the bons’ – noble families who left Earth generations ago, probably because people weren’t giving them the forelock-tugging they thought they deserved – have set up extended-family estancia, and their lives basically revolve around the Hunt. Right from the start you get the inkling that something isn’t quite right here, but it’s not clear why.

Meanwhile, in the rest of the galaxy, Sanctity is having a red-hot go at trying to control everyone’s lives. They’re doing a pretty good job on Earth, and having varying success on other planets. Sanctity is, I think, meant to hark back to age-of-exploration Christianity and the way Christian ideas and Christian leaders were used to excuse and, sadly, encourage European colonisation and exploitation. I also suspect it’s meant to be a far-future evolution of Mormonism: there are enormous heraldic angels in the architecture, as well as some other bits and pieces that sound like it.

And there’s a plague. It’s popping up all over the place, no one has any idea why, no one has any idea how to stop it… except that it doesn’t seem to have occurred on Grass. Guess we better send someone to investigate… but Grass people don’t want Sanctity on the planet… those bons are all about the Hunt… so hey, send non-Sanctity horsey people!

There are many things to love about this novel. The way that Tepper brings together such different people and their problems and achievements into one magnificent cohesive whole. The planet Grass itself, with almost no trees and an enormous variety of grasses and what that might be like as an ecology and for humans. Complicated families and the difficulties of living with them. The existence of religion and that, while the institution of Sanctity is clearly problematic, the religion itself (and Catholicism) are not. Aliens. The beautiful and evocative prose that’s just so easy to read, so enchanting, and conveys emotion brilliantly.

Previously, in Sheri S Tepper: Beauty, and The Companions.