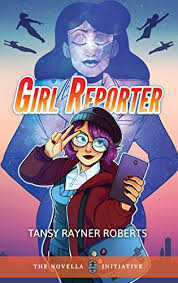 I received a review copy of this because, well, I asked my good friend Tansy if I could read it early and she said yes… it’s coming from Book Smugglers in December and you can pre-order it right now.

I have described this as a distillation of Tansy, and I stand by that. If you listen to Galactic Suburbia, or probably Verity! as well, you’ll find as you read this book that you recognise a lot of things. Not the characters, as such, nor the plot beats, but the themes. It’s superheroes and feminism, yes, which Tansy is definitely obsessed with. But more than that, it’s got romance (she’s been reading a lot of them), motherhood (there’s been a few essays on the topic in the last few years), queer representation and ethnic diversity (she’s a champion for those things). It’s got people discussing ‘old’ media vs ‘new’ media, and speculation about new new media; millennials doing excellent things and not taking crap from their elders; and a whole bucketload of snark and banter. And given her obsession with Press Gang and Lynda Day, it was only a matter of time before that came out in her fiction. Also, it’s sooo Australian.

So yeh. This is a very Tansy book.

But wait! You don’t know who Tansy is? That’s ok! You’ll still enjoy this novella if you’re interested in superheroes, and especially if you’re interested in superheroes beyond them just punching villains and swooshing in capes. This is set in the universe of “Cookie Cutter Superhero” from Kaleidoscope and “Kid Dark Against the Machine” – and if you liked those, you’ll be super excited to know that some of the characters recur here (you can definitely enjoy this cold but it’s so worth reading those other two stories anyway). It’s a world where machines mysteriously appeared, many years ago all over the world, which turn ordinary people into superheroes with different powers (and outfits) – and return them to normal again too. The stories are set in Australia, and while the first two deal with superheroes themselves this one is specifically focussed on Friday Valentina, a vlogger with a famous mother and a variety of baggage. Her vlogging focus is superheroes and they do end up being very… involved… in the story.

It’s a hugely enjoyable story that also says some sharp things about a variety of relationships, and about Australian politics in passing too. I’m rather hoping there might be more stories in this world to come…