I’ve rewatched the first season of Fringe and made these, in the last few weeks:

Quite happy with how they turned out. I was meant to have yellow and brown, too – not sure how I forgot to order those – but I made do.

This one I’ve had finished for a while. I am super happy with how the colours worked out and I just think it’s gorgeous. 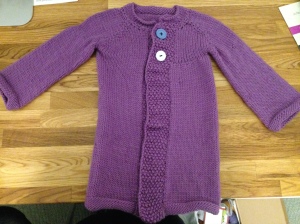 This one… well. You can see that the two sides are wonky. Not sure where I went wrong on the right chest there. One front panel is longer than the other because I didn’t count stitches properly. But I still hope that it might get worn… I think it will be quite warm…

And this one. I love this one. It’s for a dear friend’s newborn, and I love the yarn and I love the collar and I’m really happy with how it turned out. Because of the buttons I finally went to buy buttons; I went to a huge op-shop near me and they had one bag of mismatched buttons. Now it is mine and I will never have to complain about not having buttons again.

These ones are for me, me I tell you! One of the first times I’ve altered a pattern; the original just had a single cable line down the middle, but after I’d done most of it I decided that was a bit boring, and not worth the glory that is this delightful yarn: 50% silk! I’m really looking forward to wearing these.

These are for a friend. She has much smaller hands than me, which is good because these are quite the squeeze on my hands. I wouldn’t have even tried to put them on except that I needed to check the length of the thumb…

I forgot to mention in my last post that I also went to a panel called Crafts in Space, at which Tansy, Trudi Canavan and Lyn McConchie led a discussion about what sort of crafts might be done in space/while exploring and settling new planets; how they might be done and why and all that sort of stuff. The discussion itself was fascinating, with Lyn explaining that you can use a thing called a beehive to keep your yarn in one place while knitting and therefore it won’t go everywhere in zero G, and Trudi explaining that you could use a loom in zero G. Tansy raised the question of whether you would craft if you could only do it on the holodeck and therefore not actually produce something tangible – although I suggested you could have a gallery on the holodeck where you could at least see it – and we ran through the possible scenarios of what sort of native stuff might be used to craft with. There was a lot of lusting over 3D printers or fabricators: the idea of endless stash, a la the endless ammunition in The Matrix, had several people go glassy-eyed. Along with the discussion was the atmosphere. Lyn was doing this amazing shell-patterned crocheted rug, and she explained that she uses yarn from thrifted ‘jerseys’ (heh, she is a Kiwi) and she knits these rugs for various emergency services in her hometown; she also admitted that on one long-haul flight, she ended up teaching several people how to crochet because they were dazzled by her fingers as she sat watching TV. This led to some speculation about what would happen if spaceships ended up with craft specialities, and the outcome of a meeting between the yarn-dying ship and the sock-knitting ship… Then there was Trudi with this amazing i-cord device, which turned out to be an automatic French knitter which reaaally took me back to childhood; Tansy was sewing together Dr Who hexagonals for her quilt; and half the rest of us were knitting, crocheting, or doing other crafty things. It led Tansy to the inspired idea of Crafty Klatsches for the next con… only to discover that last year’s Continuum already had that idea. Our final conclusion seemed to be that when they’re filling the colony ships, the administrators ought not just look for people of reproductive age: they also need grandmas, or the colony will be screwed.

The con itself was well run, and I think the programming was generally very good. I was a bit sad that the launch of Ishtar clashed with our recording Galactic Suburbia, but I understand that there are time restraints. Also, I got my copy of Ishtar, and I got all three authors to sign it! So stoked! I’ve just started reading it so watch out for some Assyrian loving coming on soon. Anyway, the panels that I attended were generally nicely balanced in terms of the people on it – like the book blogging one had two professional bloggers (they get paid to blog at least part of the time), two personal bloggers (me and Sean, whom I finally got to meet), and our moderator seemed to fall kinda in the middle. I mentioned this to Julia, the head programmer, and she said it was more luck than design but I don’t think that entirely works; so I’ll say GO JULIA for good programming. I didn’t always want to go to the panels that were on, and I actually think that means it was well designed: a con that entirely suits me is going to be dead dull for Tansy, for a start! The hotel was ok…  I didn’t stay there so I have nothing to say on that side of things; people were disappointed about the bar closing at 11pm but presumably they had a restricted license that meant they had to.

I spent very little time with the guests, but they certainly seemed involved in the programming and con-life in general. Kelly Link hosted a session of Mafia today! – and I had an incidental chat with her about Game of Thrones, which was delightful.

Also, I said I wasn’t going to say much about the awards, but I do want to mention that The Writer and the Critic took out both the Chronos AND the Ditmar for Best Fan Production, and I was immensely pleased for them (I was sitting with the rest of Galactic Suburbia, and we gave them a standing ovation, but they didn’t notice). It was very well deserved indeed, and Mondy especially looked so stoked! Which was great because they were also hosting the awards ceremony, which may have been the greatest decision of the entire con. They have such great repartee – and this from a Mondy with food poisoning – that the entire thing ran smoothly and was as much entertainment as anything else. So, it was a highlight of the entire weekend. Also, The Courier’s New Bicycle by Kim Westwood won Best Novel. I love you, fandom.

while this one is for an adult friend who I think will appreciate it.

The eyes are a bit funny…

I was going to mix n match their feet and bodies, to have different colours – which I think is what Rebecca Danger does – but J voted for matched, so here they are… sans faces…

We decided that different expressions were the way to go, too.

These little cuties are for a one-year-old whose existence I learned of on about her birthday. She is the daughter of a woman who was an exchange student in my home many, many years ago with whom my mum and I have stayed in occasional contact. It sounds like the pregnancy was quite traumatic, but the picture we received of the girl today is adorable so hopefully it has turned out for the best, and will continue to do so!

… yeh, pretty happy with this one, too. This monster involved my first experience of turning a heel, to create feet, so that was… interesting… they’re not that pretty, but they work. Mostly.

The funniest bit? I have sold him! To a friend, to give to a kid who was having a monster party… 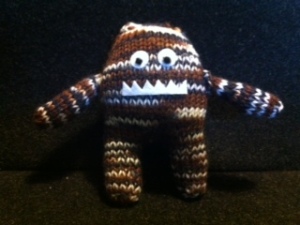 This one is even funnier-looking! It was some random wool I bought as waste yarn but I thought I’d give it a go on this little dude, who is officially Coco the Canister Monster. It’s 8 ply wool, and she fits in my palm! I think the arms are overstuffed, but overall I’m pleased… especially since J figured out how to make her less Dogbert-like….

This is Harold. I made him. Well, J cut out the eyes and the mouth, but from my template.

His feet are big for his body, and he is certainly very gangly, but I’m pretty happy with him overall. Hopefully the young recipient will not be freaked out.

I have never been a crafty person. I was into cross-stitching for a long time and still have the occasional burst; I like it because you just follow a pattern, and there’s no imagination required. I mainly have bursts of interest in winter these days as a friend gave me an ENORMOUS cross-stitch pattern of three frogs yeeears ago that’s still not finished… although every time I pick it up I discover old mistakes, which there is no way I am fixing.

ANYway, I decided recently to give knitting a go. A lot of my friends seem to have picked up the craze (Gina, aka Clutterpunk, in particular), not to mention those like Alisa who have been doing it apparently all their lives. How hard can it be?? … yeh, this is how my brain works. Drives my husband up the wall.

I started with a brown scarf, because I’ve been wanting one for ages:

When I first made it it wasn’t quite long enough, so I stole Gina’s idea and bought a brooch.

Then I decided to learn purl and ended up making another scarf in stockinette, which I later found out was a bad idea because it doesn’t stay flat… hello another brooch.

Anyway, then I went a little nuts and bought a couple of books of different patterns etc. I got Stitch&Bitch, since it seems to be the one everyone raves about… and I bought one for making knitted monsters. Because I love scarves, but even I can have a surfeit of scarves (although I do have plans for learning to cable). So I decided to start on a monster.

This is his body, made using the Magic Loop method on circular needles. His butt was done with double-pointed needles, and yes I managed to knit the wrong way out so it’s wrong-way-round. It’s all about Individuality.

A foot. Learning how to do this foot caused me – and the long-suffering husband – a large amount of angst. Truly, the teacher in me absolutely LOATHES the learner in me, because I am Not A Good Student. Still, now that it’s done I’m quite smug about this little foot. Now to make another, and also two arms… how hard can it be?