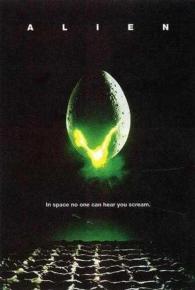 Every fortnight (ish) my beloved and I are watching a film by either Ridley or Tony Scott. We’re watching in chronological order. There are, of course, spoilers.

General thoughts:
I love the music, and the lack of music is quite stark in a number of these scenes – when they’re looking through the cabinets and the only sound is their footsteps, it really enhances the creepy-factor. And I love the graphics – the planets are gorgeous.

They have such bulky space suits – they seem peculiarly un-futuristic, but then the whole aesthetic is that it looks remarkably familiar for all that it’s set a long way in the future.

I really like the way the characters physically  deteriorate. Ripley has a massive bruise on her cheek; Lambert is grimy and sweaty and distraught. Parker is sweating. Ash, though, continues to look calm. BECAUSE ASH IS CREEPY.

The cinematography is marvellous and it’s a delight to watch. Intimate, for all it’s set on a huge spaceship.

I took notes while I watched this, and tried to imagine that I was watching it for the first time. My notes went like this:

WHY do the screens make ‘printing noises’ as they display ?

And the iconic ‘Alien’ cryosleep pods.

Mother, the ship’s computer is a room, almost organic ? Question and answer.

Cheating a bit, but this time they land a HUGE ship, and yet by Aliens they take town a tiny little dropship.  The huge ship is from a even huger ship.  Why the damage on landing? it looked so soft?

The iconic alien space ship.  And inside, the iconic HR Geiger concepts and sets.  The alien sitting in a gun turret.

Into the cave, tropical.  And then the eggs.  Hundreds of eggs.  Havn’t these guys watched any SciFi / Action movies to know what’s happening… seriously.  You’re touching it, everyone knows not to touch ‘it’.  And there it is, now you’ve done it and it’s attached to YOUR FACE.

What does the alien eat to grow??

Also, if you haven’t already, you should go read this excellent and incredibly detailed essay on fonts etc in the film.

Actors out of place:

The scary leader of the commune from Big Love is one of the engineers! Also, Bilbo in space! And the War Doctor in a spaceship that’s as large on the inside as the out!