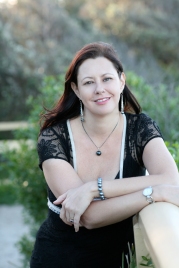 Kate Forsyth wrote her first novel aged seven, and has now sold more than a million copies around the world. Her novels include The Beast’s Garden, a retelling of ‘Beauty & the Beast’ set in the underground resistance to Hitler in Nazi Germany; The Wild Girl, the story of the forbidden romance behind the Grimm brothers’ fairy tales; and Bitter Greens, a retelling of Rapunzel interwoven with the true life story of the woman who wrote the tale, which won the 2015 American Library Association Award for Best Historical Fiction. Kate’s children’s novels include The Impossible Quest, The Puzzle Ring and The Gypsy Crown. Named one of Australia’s Favourite 15 Novelists, Kate has a doctorate in fairy tale studies and is an accredited master storyteller.

Your most recent book comes from your research into the fairytale of Rapunzel, and connects to your wonderful novel Bitter Greens. What was it like to prepare The Rebirth of Rapunzel for a general audience, rather than an academic one? Do you feel like you’ve got Rapunzel out from under your skin now, having spent so long thinking about her?

It was great fun putting THE REBIRTH OF RAPUNZEL together. I included my doctoral thesis, which examined my long-held fascination with ‘Rapunzel’ and how I used it to write Bitter Greens, along with a number of topic-related essays, articles and poems. I did not rewrite my doctoral thesis for this publication, as my style has always been accessible rather than academic, and I trust greatly in the intelligence of my audience. So it was more a matter of deciding what to include, and putting it into order, than any new writing or research.

And yes! I think I have finally exorcised Rapunzel …

Last year saw the publication of The Beast’s Garden, a take on “Beauty and the Beast” set in Nazi Germany. What did you feel that you could accomplish by choosing that particular setting for the novel?

I didn’t really ‘choose’ the setting or the storyline … the idea came to me as a kind of vision as I drifting in dreamland, and I found the idea so thrilling, so electrifying, that I was unable to do anything but try and bring it to life. It was really quite extraordinary, because the book is about the German underground resistance in Berlin during World War II … and I did not even know there had been an underground resistance movement!

I suppose my subconscious mind put together my interest in the Grimm Brothers and the ‘Beauty and the Beast’ fairy tale with my fascination with World War II and resistance stories, and saw how interesting combining the two could be … but it was certainly not a conscious decision or choice.

However, once I began work on the novel I found it increasingly important to honour the true-life stories of the brave men and women who resisted the Nazis. My most recent books have, to a large extent, been concerned with exploring fairy tales in new and surprising ways, and giving voices to unjustly forgotten women of the past. In Bitter Greens, it was the fairy tale teller and writer Charlotte-Rose de la Force, the woman who wrote ‘Rapunzel’ as it is best known. In The Wild Girl, I told the story of Dortchen Wild, the source of many of the Grimm brothers’ most famous fairy tales. In The Beast’s Garden, I tried to bring to life many of the ordinary women who were so extraordinarily brave during the terrible time of the Second World War.

You’re currently writing Beauty in Thorns, combining the Pre-Raphaelite artists with the fairytale of Sleeping Beauty. What inspired you to combine these two elements? What sort of a story can readers expect from it?

I have always loved the art and poetry of the Pre-Raphaelites, but I never really considered writing about them … until I was working on a chapter on William Morris and his poem about ‘Rapunzel’ for my doctorate. Then I began to get interested in the Pre-Raphaelites’ use of fairy tales. The more I read, the more I discovered … and then, of course, I stumbled upon the extraordinary story behind Edward Burne-Jones’s most famous creation, the ‘Legend of Briar Rose’ paintings. To explain it simply, Burne-Jones drew upon the Sleeping Beauty fairy tale half-a-dozen times over a forty year period, using his wife, his mistress, and his daughter as the model for the sleeping princess in turn. The novel is told from the point of view of eight women in the Pre-Raphaelite circle, including Lizzie Siddal, Jane Morris, Christina Rossetti,and Fanny Cornforth, as well as Georgie Burne-Jones and her daughter Margaret. The book weaves together their stories in a way that has never been done before. It’s been an utterly fascinating project, and I’m really grieving now I’m coming to the end of it.

In fantasy, I’ve loved Juliet Marillier’s Blackthorn & Grim series, Kim Wilkins’ ‘Daughters of the Storm’ series, and Garth Nix’s ‘Newt’s Emerald’. In parallel historical/contemporary fiction, I really enjoyed ‘The Wife’s Tale’ by Christine Wells and ‘The Last Painting of Sara de Vos’ by Dominic Smith. In contemporary fiction, ‘Our Tiny Useless Hearts’ by Toni Jordan, ‘Nest’ by Inga Simpson and ‘Big Little Lies’ by Liane Moriarty. In romance, I’m just loving Anne Gracie’s ‘Spring Bride’ and the other books in the series. Fiona Wright’s non-fiction book about anorexia ‘Small Acts of Disappearance’ was brilliant. And my sister Belinda Murrell has a lovely new YA timeslip adventure out called ‘The Lost Sapphire’.

Emily Bronte – there is so much I would like to ask her!

This interview is cross-posted to the 2016 Snapshot blog, along with all the other Snapshot interviews.