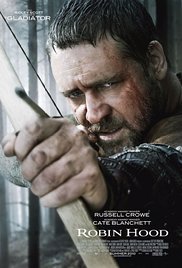 Getting through Great Scott!

A: And so we come to the only film on our list that neither of us has seen. This promises to be interesting. I have an abiding fascination with Robin Hood: both visually (I will quote the animated version at you; I don’t care if you disapprove of my adolescent love of the Costner version) and academically (Stephen Knight’s history is awesome). So… I’m a bit scared.

A: Yikes look at that font.

So, 12th century eh. Blanchett already being forceful, with a bow? I’m pleased. A flaming arrow!

A: Robin Longstride, eh? That’s different. But it’s still Richard not-so-lion-heart’s time. AND we’re actually on crusade with Rusty! (wait, not crusade – this is France, surely, with Richard more interested in running French bits than his English territory)

J: So basically it’s Gladiator … gosh I hope it’s not as slow. I wonder if they will show the archer’s paradox… slow motions arrows n all.

A: So the actor I thought was Richard isn’t. Instead, Richard is looking mighty old and unimpressed. Now we’re besieging a castle with all the medieval weaponry we can possibly fit into one frame. Which means we’ve started with the domestic and now we’re in the Fighting Men Stuff.

J: And yet, in true Ridley style it still feel slow… how can one make make so much, seem so slow.

A: Aaaaand now we’re in London, and John is about to get a telling off from The Great Eleanor. Because he has been having rumpy with the French king’s niece. Eleanor is a bit… weak…

J: She has a French haircut.

A: I don’t even know what that means. But anyway we’re back in camp, and it really could be from Gladiator. Rusty is having a run-in with a man much bigger than he is: OH I WONDER WHO THAT COULD BE. (Discussion of wives from Richard and his great friend – who turns out to be Locksley!: no mention of Richard’s wife, Berengaria, the only English queen who never set foot on English soil and she’s even forgotten here. Poor woman.)

Naw, Richard walking in disguise, comes across Robin and John fighting, we have a developing bromance… and Rusty is speaking truth to power, again. Ah, morality.

J: He has the same haircut as Gladiator – are we sure this isn’t just extra footage ?

A: the costumes are different. A bit.

A: aaand speaking truth to power, when requested to do so, gets you into the stocks. Of course.

J: True to form, Ridley is in no rush to do … anything.  Why get on with the film when you can just muddle along.

A: It’s all about feeling like you’re actually there.

And there. Right there. Historical accuracy FTW: Richard takes an arrow through the neck in a completely pointless battle in France. Aaand Robin and his friends – “the more the merrier” ahaha – decide that’s the sign to get the heck out of Dodge.

A: srsly? The horse with the crown happens to bolt from the Evil Englishman aiding the French? AND runs to Our Robin. Give. Me. A. Break.

J: At least the elite military archer from birth narrative makes some sense to give Robin a back story, and has some historical precedent and explains the ability of his gang of ‘merry’ men.

A: Locksley dying slowly and heroically in Robin Longstride’s arms. A Great Burden is lain on Our Hero. wah wah bond between father and son.

A: we need a singing rooster to bring some liveliness to proceedings.

And now we get a line STRAIGHT out of A Knight’s Tale – all that makes knights knights is their clothes, etc. How convenient we’ve arrived on the scene of a massacre of knights when we but common archers need a passage home!

A: And John is beginning his reign exactly as one would fictionally expect, denying Robin a reward because of his ‘father’ owing tax.

Ah, and at last the Sheriff of Nottingham! Which is Tom from Spooks… with truly appalling facial hair.

A: William Hurt is William Marshal! And huh, it IS Oscar Isaac as John. Who has a serious problem of younger son jealousy, and enjoys ranting at his mother.

J: Oh look a forest full of orphans … who conduct raids and such … I wonder how they will fit into this glacial story?

Huh, first reference to the notion of being Saxon. Interesting. And also interesting: Robin requires help to get undressed out of his chainmail. Because yes, of course he would… and at least they made it uncomfortable rather than romantic.

Aaaand Walter proposes a sneaky deal: Robin Longstride becomes Locksley! To save the place! And be Marian’s husband! Oh old man you may be well-meaning in some sense, but you’re also nuts.

A: All poor women just want to have sex. Of course.

Oh noooo the French are invading… in one boat… quick, send a pigeon…

Loving Cate Blanchett’s attitude towards having to accept Robin as her husband: here, sleep with the puppies.

J: Why is it that the evil ones always make a metal clinking noise when they walk ?

It’s walking an interesting line between being appropriately dirty, for the time, and being quite tidy and appealing to look at. Always the difficulty of medieval films.

And oh ROBIN, really? “The deer were given by God”… really? Gah.

A: Those three sidekicks are one of the best parts of this film. They’re hilarious.

And of course, Robin manages to get the grain to stay where it ought to, rather than sent to York… and so Tuck and Robin begin to conspire … and thus begins a LIFE OF CRIME.

A: and then it rained, because God loves them. I want to watch a whole film of the Merry Men being amusing.

Oh noes, the Evil Englishman who is now John’s chancellor is being Evil. What a surprise.

J: Queen mother talking to the French strumpet, laying out Godfrey’s betrayal ?of John to the French. So she tells John … tantrum … pashing … I guess it’s all ok then.

A: NOT a strumpet: future queen!

Huh. Godfrey is stirring up the barons against John. And it’s only 15 years til Runnymede.

J: And we return to the dancing sacks.  Plus Marion and Robin have a little dance…

A: Pretty sure a young boy growing up on the streets and then fighting for a decade would have no clue of the steps in a courtly dance. Or any dance.

A: number of romantic bones in your body: c. 0.

Walter finally tells Robin what he knows about Robin’s father; a stonemason who was also a philosopher – really? A Chartist? Um, weird.

What’s the only thing that can unite the English? Hatred of the French…

Um. All of a sudden it appears that it IS 1215, with the barons claiming they wish a hand in the law-making. So… Rusty’s father effectively had a hand in Magna Carta??

J: When are we going to start hiding out in Sherwood and you know, robbing the rich to give to the poor.  This a crappy Robin Hood story.

A: And NOW Rusty himself is effectively demanding what becomes the Magna Carta. That wailing sound is history being tortured.

This is … not worse history than Gladiator, but pretty close.

Excuse me while I can’t breathe at the temerity of including “An Englishman’s home is his castle”.

J: This film is lame.

A: Oh noes, Nottingham is being attacked. Marion rounded up, the church despoiled – all that mead! … where’s our protector now?

We know they’re evil because they’re taking joy in baiting an old blind man. And then they kill him.

A: Oh, a threat of rape. That’s deeply unpleasant. And unoriginal. Burning a whole bunch of peasants together is also hideous…

Well finally Robin et al turn up. I am glad that Marian managed to save herself though.

J: Baldy is going to cop an arrow in the neck…

A: nah, that’s going to be a face to face battle.

Kissing. Really? (Also: how funny to have two Australians playing these two seminal English folk heroes.) And ROBIN says ‘I love you’? Aw, so sensitive.

A: those boats are straight out of Troy. …

J: Are we Saving Private Ryan now ? How come it looks like a backwards D-Day …

Look I’m sorry, Rusty, but HOW does an uneducated archer become an expert military leader? Or, for heaven’s sake, a democratic demagogue of the 12th century? It’s just too unbelievable.

Also we’re also in Braveheart. Or a Lord of the Rings movie. (Marian arrives in armour… so she’s Eowyn then. Does that make the Evil Englishman the Witch-King of Angmar? Also her ‘troops’ are the kids, so basically hobbits.)

J: Robin has a HAMMER (not a WAR HAMMER) just a hammer …

A: He’s an archer. Not much trained in close quarters combat.

J: I TOLD YOU, HE WAS GOING TO GET IT IN THE NECK.

A: oh dear me that was THE WORST SCENE in the whole film. Slow motion shooting WITH A WET BOW AT GREAT DISTANCE. Spare me.

Meanwhile no Englishman has ever managed to cast a really great, worthy French king, as far as I can see, when it involves the English fighting them. That’s a shame.

A: It’s slow, but it’s not confused. Just multiple strands.

And thus begins baronial insurrection. And Robin is named outlaw by John.

And now the film is going to make the idea of living in the greenwood Terribly Romantic, with lots of meat and no undergrowth to beat through… no tax or tithes, all nature looking after us GIVE ME A BREAK. As if there are no, for example, ticks or fleas.

J: Still had time to get my Roman Gladiator haircut though… Fitting that the film would finish in Slooooow motion.

A: This is a rubbish addition to the Robin Hood canon. It adds nothing of substance at all. And there were no singing roosters.

Leave a Reply to Great Scott: an overview | Randomly Yours, Alex Cancel reply